Today we’re thrilled to welcome fellow eXtasy author Maggie Blackbird with a fabulous kinky release just in time for the holidays. You won’t want to miss this one!

He’s got the perfect Christmas present for the community’s chief—vengeance wrapped in a shiny box with a red bow on top.

Joseph Slade Indian isn’t angry. He’s pissed. Pissed that the man who threw over his love for glory and money is back, and now leads their Ojibway community as the new chief. Holding the pain deep in his chest, Slade knows how he’ll celebrate the most miserable day of the year—opening a gift of recompense after being dumped by the one man he dared to love.

Gavin Pemmican is full of regret. He knows he made a big mistake leaving Slade for a materialistic dream of power and prestige. No longer the poor bullied misfit but an educated lawyer, he’s ready to put his skills to the biggest case of his life by brazenly challenging Slade in the kangaroo court of sexual torture he’s daring to stick Gavin in—and win back the only man he’s ever loved.

Gavin swiveled on his black shoe, glancing over his shoulder. No, not a glance. His heavy-lidded eyes burned into Slade. Searing him until his mouth dried.

The napkin fell to the floor.

Reality slapped Slade’s face cold, and fire crackled in his veins. Who did this asshole think he was, blatantly tossing garbage around while he stood watching?

Gavin kept gazing at him while he shifted one leg over the other. The sound of his heels clicking against the floor echoed off the walls.

Slade gritted his teeth. Was Gavin daring him to get mad, going to throw around his newfound power if Slade told the high and mighty chief to bend the hell over and pick that damned napkin off the floor?

Gavin’s dark eyed gaze continued to cut into Slade, as if sharing a secret. There wasn’t a hint of smug satisfaction. Only a potent, seductive invitation.

A man had needs. Slade swallowed. And he wasn’t about to get laid on the rez, no matter if the population clocked in at eight hundred members.

With one final lingering peek, Gavin disappeared inside his office.

Slade’s breathing hitched. The lightness in his chest twisted until his lungs clenched. He ought to leave the napkin on the floor and find out what Gavin had to say about that. Slade set the mop handle aside. If he ignored the trash, the band manager would call him out.

He trounced to the washroom door and leaned down, swiping up the napkin, but the plush material melting into his palm didn’t resemble a napkin. Then what the…? He turned the garment over. His throat clamped shut. Underwear. He was holding Gavin’s underwear.

An Ojibway from Northwestern Ontario, Maggie resides in the country with her husband and their fur babies, two beautiful Alaskan Malamutes.

When she’s not writing, she can be found pulling weeds in the flower beds, mowing the huge lawn, walking the Mals deep in the bush, teeing up a ball at the golf course, fishing in the boat for walleye, or sitting on the deck at her sister’s house, making more wonderful memories with the people she loves most.

What will They Unwrap?

Welcome to the 168th week
of My Sexy Saturday!

This week’s theme is My Sexy Holidays. We think Mack and Carol Walker are definitely headed for a sexy holiday… Their story will be released December 3 at Extasy Books, where there’ll be a Stocking Stuffer short story every day until Christmas! 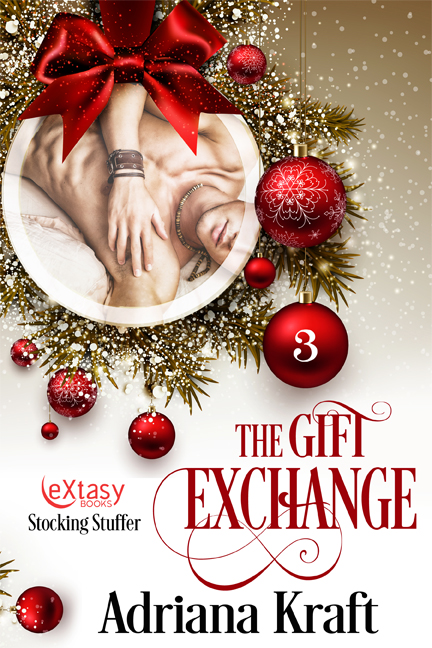 It’s Christmas Eve—
what gifts will Mack, Carol and Tara
unwrap together?

Here are the opening seven paragraphs:

“Life doesn’t get much better than this.” Mack Walker hugged his wife closer as they gazed at the blanket of stars enshrouding the crisp northern Minnesota night.

Carol playfully splashed heated water at her husband before sliding her hand down toward his crotch. “We could make it even better. I love our privacy. No one can see our hot tub.”

Mack chuckled. “They’d have to be nearly on top of us with night vision goggles. Our closest neighbor is half a mile away.”

“If they get that close, they might be wanting to join us for a little fun.” She squeezed his lengthening cock.

He tugged at her nipple. “Fantasies. Fantasies. But such talk does always gets us going. Your wild side comes out when you think about another couple joining us.”

Be sure to click below to travel to the other great authors for their sexy excerpts!