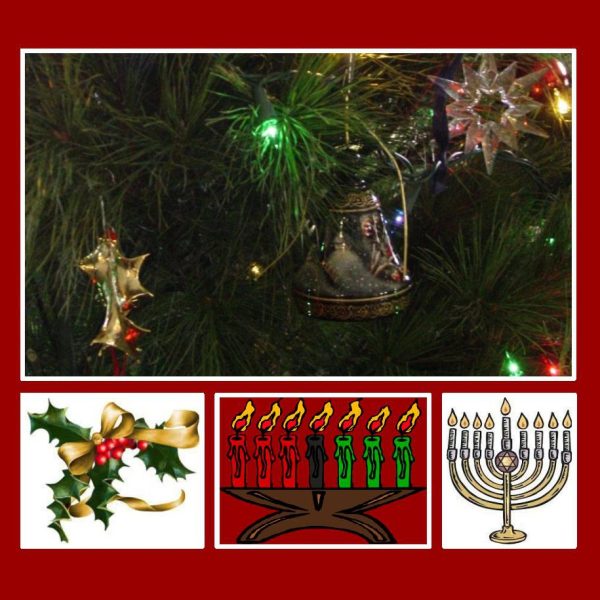 Both of us who write under this pen name honor all who celebrate turning towards the light, in whatever tradition has come to be meaningful for you. At the center of this turning is warmth, love, peace, light, and hope. This is what we wish for all of you, not just in this season, but year round.

Sometimes our characters experience this as well. Here is Christmas Eve from two of our books:

From A Reluctant Santa

Set Up: Cliff spent the middle of the day playing Santa to needy kids, hosted by a local golf course lodge, with Carol assisting him as his elf. Now it’s late evening.

Carol snuggled into Cliff with his arm around her waist as they leaned against the lodge balcony railing, both of them in awe of the star-studded sky forming a canopy overhead. “This is so spectacular. The stars seem so close. And so many more are visible up here than in the city.”

“For sure. Sometimes I feel like time stands still while the night sky does its nightly dance. You should be here sometime when the Northern Lights put on a show. Dazzling. It can be like sheets of color fading in and out, daring you to ignore them. The night sky up here is so vast, almost overwhelming.”

“The stars are so brilliant. Santa won’t have any trouble navigating his way tonight.”

Cliff squeezed her tighter. “Especially if his favorite elf serves as his navigator.”

“Thanks again for taking me to the Christmas Eve service. It was so special.”

“It was just right. I gave up long time ago trying to deal with Christmas intellectually. I’m not into debating whether this happened or that didn’t. It’s the feeling of Christmas that moves me. And those kids certainly did that tonight. I nearly lost it when they marched down the aisle to The Little Drummer Boy with coffee cans hanging around their necks, pounding those cans like they were the most sophisticated drums ever made.”

“They were happy and proud, from the oldest to the youngest.”

“That says a lot about the adults, including children in the service like that. Wonderful. The Christmas spirit was palpable.” Carol suddenly pointed toward the sky. “Did you see that?”

“A shooting star. I hoped if we stood out here long enough we’d see some. That was a long, bright one. Don’t see many of those.”

“So fitting for the night. For Santa.” Carol hesitated. “For Santa and his elf.”

Set up: Nancy and Matt are dating but unsure whether it may be just a fling. She’s invited him to Christmas with her family in their North Woods cabin, and it’s now Christmas Eve:

The evening meal was a buffet of cold cuts, cheeses, breads, veggies, nuts, and eggnog. Much of the evening was spent calming the children down or revving them up about Santa. Most of the adults and even the children, with the exception of the youngest, shared stories of special Christmas memories.

Matt enjoyed listening to the stories. He laughed when Nancy’s mother said that as a child, she once thought Santa was just leaving her coal when she mistook the delivery man – dressed in a red coat, no less – for Santa. Matt’s eyes misted when Nancy shared a story of her father bouncing her on one knee while reciting from memory “Twas the Night Before Christmas.”

He became anxious when he realized there were only three others remaining who had not yet shared a story. Nancy’s family was a fun family to observe, but he didn’t fit in with them. What could he offer for a story? He knew they’d expect one.

When it was his turn, the words came of their own volition. “One of my best gifts was a book called The Flight of Dragons. I was eight years old. It was a rich and wonderful book and had lots of detail about exactly how dragons fly – using the same gases that they use to breathe fire. It sure was high adventure for me – we hardly ever went to movies, and we had no TV.”

Matt smiled at the boy and continued, “That book was probably the seed that began my quest for more knowledge about ancient cultures and myths.”

“Without that book, you wouldn’t be sitting here with us tonight.” Nancy’s voice was unusually quiet, and he couldn’t read the soft expression on her face.

“I suppose you’re right. Every little step along the way shapes us in one way or another. But,” he turned to speak to the children, “I want you to know this was a fun book. I couldn’t stop reading, and I finished it by bedtime on Christmas night. Of course, I started rereading it the next morning.”

The children applauded and were joined by the adults. “I want to get that book, professor,” Michael said, coming to stand before Matt. “It sounds exciting. I especially like books about the Knights of the Round Table.”

“Me too,” Matt replied, absently brushing back a lock of hair from the boy’s forehead. “I expect in my library I have just about every book written on the subject that’s available to the public.”

“Really!” The boy’s eyes grew huge. “I’d sure like to see that library.”