WHO IS GILLIAN SMITH?

As the series continues, she becomes more mature, taming some of her impulsiveness and learning to understand the nuances of desire. She assumes increasing responsibility for the work of the Guild, providing design guidance and supervising the other engineers. Meanwhile, she remains open to the varied opportunities for sensual pleasure offered by Guild membership. She understands that lust is the lubricant for the Guild’s creativity and that despite the outrageous ways that it is sometimes expressed, the bonds among the Toymakers go far beyond the physical.

Authors often – perhaps even always – use aspects of themselves when creating their characters. Nevertheless, Gillian is not me. When I was nineteen, I was a dreamy bookworm, not an engineer. While she is bold and self-confident, I was painfully shy. Her appearance – tall, slender, with curly reddish hair – has little in common with my short, curvy build and mousy brown locks.

Still, at her age I was as fascinated by sex as she is, if nowhere near as active. As I grew older, that fascination deepened. I began to explore my kinks and cravings and live out my fantasies in a manner that she’d understand. I’ve had sexual adventures she’d find quite familiar. In the meantime, my view of sexuality ended up having quite a lot in common with hers – that even what seems like casual lust has emotional and spiritual dimensions.

I also must admit to basing some of Gillian’s emotions and behavior as a technical project leader on my own experience. I did end up as an engineer of sorts: a software engineer. Most of the technology in the Toymakers Guild series comes straight out of my imagination. I couldn’t wire a motor or machine a set of gears to save my life. But I do know what it’s like trying to deal with bugs in your programs when you’re facing a critical deadline. I understand the heavy burden of responsibility that comes with commitments that seem impossible to fulfill.

So, yes, Jill and I do share some traits and beliefs, though there’s more than a century between our worlds and half a century between our ages.  To me, though, she’s an independent individual – and after three novels, remarkably real. As an author, I’m amazed by the way characters develop over the course of writing a book. They begin as a sketch, perhaps borrowing from people we know (including ourselves), but before long they have lives of their own. Having followed her for more than three years and two hundred fifty thousand words, I know who Gillian Smith is. Honestly, though, I don’t know where she came from. 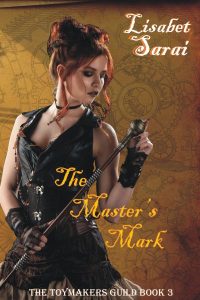 How do you train a steampunk sexbot?

Normally she would consult the enigmatic Master Toymaker, but he seems preoccupied with his own concerns. Though her lusty crew of sexual renegades can offer technical and carnal assistance, Gillian is ultimately responsible for delivering the promised, near-impossible technology.

It’s fortunate she’s not one to give up—not even when events threaten the Guild’s very survival.

Defying the repressive morality of the Victorian era, the Toymakers Guild uses advanced technology to fabricate bespoke sexual artifacts for the discrete pleasure of select clients. Its members are not only brilliant engineers but also sexual renegades seeking freedom from the prudish society that surrounds them. These are their stories.

When several knocks went unanswered, Gillian tried the knob. The door was unlocked. It opened upon a scene that set her pulse racing.

Spring sunshine poured in through the tall window, filling the room with a luminous glow. It shone like a spotlight upon the bed, where two female figures lay entwined. Lucy lay on top, stark naked. Sunbeams glinted off the golden locks that tumbled down her back. The graceful curve of her spine flowed down to her pert, round buttocks. Those luscious, peach-toned globes tensed and relaxed in a steady rhythm as she rubbed her cunny against the body beneath her.

Under Lucy’s writhing form, with her arms stretched out on both sides and her thighs spread wide, lay Emily. The former maid wore nothing but a shift. As Gillian watched, entranced, Lucy rose to her knees and pushed the thin linen garment up to bare Emily’s breasts. The sight of those perfect hemispheres made Gillian’s mouth water. Apparently they had a similar effect on Lucy, who leaned over to suckle on one dark, pouting nipple.

The flaxen-haired seductress licked slow circles around each taut nub, then slid down toward Emily’s little belly, leaving a trail of wet kisses. When she reached Emily’s cunny, she used her thumbs to open the sweet cleft and swept her tongue from back to front.

Emily yelped and arched up to maintain contact with Lucy’s agile tongue. Gillian shuddered in vicarious pleasure. Lucy squirmed backward to improve her angle of attack, then dove into her partner’s pussy, licking and sucking with a gusto that soon had Emily thrashing and moaning anew.

The girl twisted and tugged at her nipples as she humped Lucy’s face. Her braids came undone, the fine, ash-blond hair tangling on the pillow. Her inner thighs gleamed in the slanting afternoon sun, wet with Lucy’s saliva and her own copious juices.

Gillian’s breasts were swollen and tender. Her drawers were soaked, her clit a bright, burning coal. She couldn’t bear another instant of this detached surveillance.

After closing the door behind her, she placed the velvet bag on the dressing table and quickly stripped off her clothing. At first she thought the women were too involved with one another to notice her presence. Then Lucy raised her head from between Emily’s legs and flashed her a sticky-cheeked grin.

“Jill! Do you fancy a taste? Our Emily’s sweeter than Turkish delight.”

“Of course not. And I doubt Emily has any objections – do you, pumpkin?”

The ex-maid, who lay gasping upon the pillow, made no response, probably because she could not see Lucy’s face. Gillian stepped nearer to the head of the bed and leaned over to give the girl a quick kiss. Emily responded with enthusiasm, wrapping her arms around Gillian’s neck to pull her close and sliding an exploratory tongue between her lips.

Who taught her that? What had the girl been up to, while Gillian had been preoccupied with work and her feuding lovers? 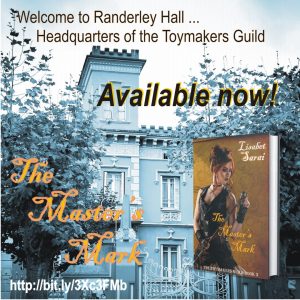 You’ll find information and excerpts from all Lisabet’s books on her website (http://www.lisabetsarai.com/books.html), along with more than fifty free stories and lots more. At her blog Beyond Romance (http://lisabetsarai.blogspot.com), she shares her philosophy and her news and hosts lots of other great authors. She’s also on Goodreads, BookBub and Twitter. Join her VIP email list here: https://btn.ymlp.com/xgjjhmhugmgh

Lisabet Sarai is running a contest to celebrate the release of The Master’s Mark. The prize is a $10 book store gift certificate, plus an ebook copy of the new novel in your choice of formats.

To enter, do the following:

One entry per person, please. On the first of February, Lisabet will randomly draw a winner from among all the entries. Be sure to send your entry to the “contest” email address above.