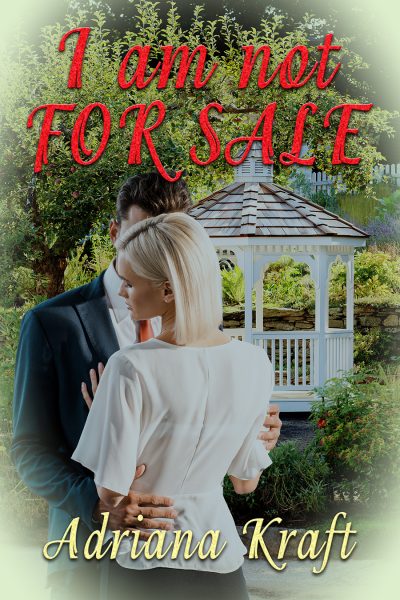 I Am Not for Sale was born in the fortuitous intersection of several threads when we lived in a small Midwest town – our favorite sole proprietor espresso café, the opening of a newly authorized casino in the next county, the growth of a new regional chain of espresso cafés, and a work trip one of us took to Ukraine at about the same time. Our heroine is a feisty self-sufficient recent Ukrainian immigrant to the U.S. whose aunt helps her open an espresso café in their small town. Her café,  the new chain of cafés, and the possibility of a new local casino are on a collision course…

He scopes her out, she keeps a watchful eye on him, and the sparring begins.  But there are other players involved, and the web of intrigue soon threatens Nadja, her shop and her aunt as well as Kevin, his potential franchise, and his son.  Within this cauldron simmers a sexual attraction between Nadja and Kevin that catapults them to overcome their fears of intimacy and commitment.  Their lovemaking is tender and raw.  Their love is nearly lost in tragedy—can it survive doubts, fire and even a death?

Here is our opening scene:

Glancing quickly at the clock on the far wall of her small coffee shop, Nadja fought back annoyance at customers who arrived when she was ready to close and go home. But in America, she reminded herself, the customer was always right.

She managed a small smile for the tall dark-haired man wearing a classic blue sport coat with a red tie knotted loosely about his neck. It was the end of the workday. He was probably grabbing a coffee for the drive home. “How may I help you?”

He must’ve noticed her peeking at the clock.

“I’m sorry, I’m behind schedule. It’s been a grueling day.”

“It’s okay,” she murmured, not wanting to prolong her day by getting into a protracted conversation with a stranger. “What would you like?”

He studied the menu of drinks printed neatly on a chalkboard over her shoulder.

She didn’t have to look at it. She’d printed the block letters herself and knew the menu and the ingredients of each specialty coffee by heart.

She tried to wait patiently for the man to make up his mind. She took pride in being decisive. The man in front of her—the man with the square jaw and deep-set brown eyes—looked like a take-charge sort of guy, but he couldn’t seem to decide what he wanted. She cleared her throat.

The stranger flinched and glanced at her. “I’m sorry again. And you’re probably in a rush. It’s just that you have so many choices. I’ll have a grande vanilla latte.”

She nodded and turned to prepare his drink.

He followed her to the end of the counter and watched.

Steam gushed out of the machine. She narrowed her eyes. If she wasn’t careful, steam would be pouring out of her ears. Many customers watched her work, but this one did so more deliberately than most.

It was a comfort knowing that since it was Tuesday, her aunt would keep the shop next door open another two hours. The door connecting their shops stood open, so it wasn’t quite like she was alone with this intense guy.

She stirred the latte and set it on the counter. He paid her and she made change. She fully expected the gentleman to take his latte and leave, since he had miles to go.

She scowled when he turned his back on her and strolled to a corner table.

He looked back at her and grinned crookedly. “I hope it’s okay if I drink this here. It’s too big to set in my little car. Spilling hot coffee can be dangerous.”

She nodded. “I’ve got to clean up anyway. No hurry.” She grabbed a rag and began scrubbing down the counters. With any luck, the stranger was a fast drinker, or maybe he’d spill it.

She peeked at him out of the corner of her eye. He didn’t seem to be hurrying at all—he seemed more interested in studying her shop, and her. Unless he was an avid reader, there wasn’t a lot that should catch his eye.

Relief swept over her when the man stood. Just as quickly, her stomach knotted. He wasn’t leaving. He walked over to one of several bookcases lining the walls.

What had gotten into her? She was a twenty-nine-year-old woman capable of handling nearly any man. If nothing else, she knew her five-foot-ten size intimidated most men—though the fellow in the sport coat gave no clue he’d noticed. And her aunt was only a few steps away. It wasn’t as if the guy intended to accost her. If he’d planned to rob her, would he have bought a drink first?

He stared across the empty room at her. She couldn’t escape his scrutiny. “This is a beautiful setting for taking one’s time with a cup of coffee. I hope I’m not keeping you.”

“You have a fine book collection.” He drew one out from the shelves and leafed through it absently. “Do you sell books as well as coffee? Or do people borrow them?”

“I lend them out. It seems a shame to keep books stored away when others might find them useful.”

“What’s the penalty for people who fail to return them?”

She folded her arms across her abs. “I don’t know. I use the honor system. So far each book has come back.”

He carried her book and his half-full cup over and set them on the counter before her. “All of these books… Is that why this place is called Nadja’s Literary Cappuccino?”

She grinned softly. She couldn’t help it. The shop was her pride and joy—it was her child. And the man clearly approved of her establishment, of her work. “That, and because on most Friday evenings, we have readings by local writers. Some nights it might be live music. And occasionally we even feature graphic artists and their work.”

“A cultural mecca, of sorts.”

“This town is a cultural mecca,” Nadja responded with pride.

“I’ll have to take your word for that. I haven’t had time to look around.”

“Too many people hurry through on the way to the big cities.”

“You’ve done a tasteful job with it.”

“You surely don’t run this place by yourself?”

“Not anymore. I have two full-time employees and a few part-timers who come in for our busy nights.” She glanced at the clock, whose hands now showed five minutes after six. She blushed. “I close on Tuesday, Wednesday and Thursday at six o’clock,” she said, in case he wondered why he was the only customer remaining. “On Friday and Saturday we are open until ten o’clock.”

He eyed her levelly, with a hint of danger. “So how much would it take to buy this place?”

Stunned, she stepped backward and caught her breath. “I am not for sale!”