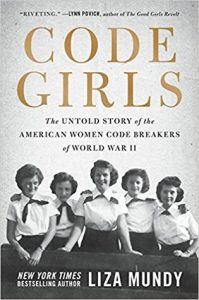 Code Girls, by Liza Mundy, is the third book in my current series of book reviews featuring the role of women in the WWII Allied victory. The first two books – The Atomic City Girls, and Daughters of the Night Sky – are historical fiction based very closely on actual events and characters.

Code Girls is not fiction, even though through most of its pages it reads as smoothly and dramatically as any novel. Following interviews with more than twenty participants and years of meticulous research, much of the data having spent decades as classified and unavailable, Liza Mundy has crafted the story of over 10,000 American women, most freshly out of college, who secretly worked during the war to break the German and Japanese military codes. These women saved thousands of lives and in no small part helped to bring down first Germany, and then Japan.

They – and their superiors – could tell no one about it for decades.

In November, 1941, letters began going out to select women who were seniors at several of the nation’s elite colleges. The letters invited the women to an interview, where the questions simply were whether they liked crossword puzzles and if they were engaged to be married. If they answered appropriately, they were invited to further meetings where they learned about “cryptanalysis” and were told never to utter that word to anyone else. They entered on-campus training in code breaking – again, about which they could tell no one, not even family members. Those who passed the rigorous training were the earliest recruits to facilities being readied for them in Washington, D.C., by both the Navy and the Army.

Over the ensuing years, recruitment criteria broadened, but secrecy, the ability to identify patterns, and having a bright mind remained paramount. Mundy’s account traces the initial American codebreaking developments between the wars, then proceeds through the war years chronologically. By weaving together historical data and material from her interviews, she provides a window into the mundane as well as the dramatic. We learn what interaction was like in the cramped working quarters; how the women were treated by outsiders – who could never know how technical and important their work was – how they spent their relatively few free hours; and, for many of them, how their lives unfolded after the war.

Most of them remained unacknowledged and unsung for the rest of their lives. Some family members never learned what a mother – an aunt – a grandmother – had accomplished, how many ships were sunk because the Navy “happened” to be in the right place at the right time, due to intelligence provided by the codebreakers.

I found this book to be both informative and very engaging, and I highly recommend it.