We all know the brain is the most important sex organ – so today’s Stay Sexy column is about keeping your brain supple, happy, engaged and excited. In short, exercising your brain!

It’s one of those basic use-it-or-lose-it phenomena – the more we stay interested, curious, open to new situations and eager to learn, the healthier our brains will be. “Anything that closely engages your focus and is strongly rewarding… will kick your brain into learning mode and necessarily notch it up,” according to a recent article.

So today I’m going to share our newest curiosity – the Saguaro Cactus, Arizona’s famous trademark cactus with its arms pointing to the sky. It’s new to me. I’ve never (before) lived where they grow and hardly ever traveled where they were common. But for the month of March, we’ve parked our motorhome at an RV park in the Sonoran desert west of Tucson, Arizona. The edge of our park opens onto desert trails that lead to Tucson Mountain Park and beyond it, Saguaro National Park. 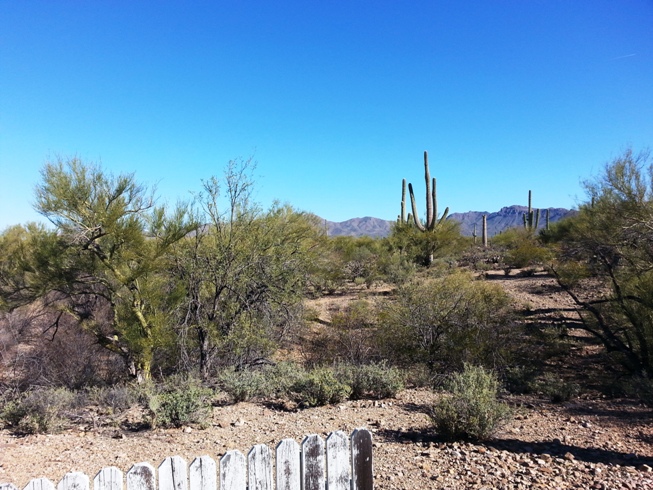 We’ve started hiking those trails – a mile and a half yesterday, two miles today. We can observe the entire life cycle of the Saguaro on our wanderings. Yesterday, under the protection of a Palo Verde tree (which is a story for another day), we found a virtual Saguaro nursery. The baby cactus plants need just enough protection from the occasional freezing temperatures in this region that they thrive best with a little shelter. There must have been over a dozen “babies” under this tree, ranging from less than an inch to over a foot. 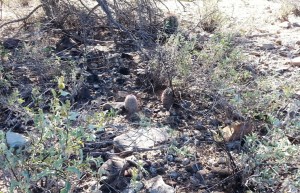 These two babies in the middle of the photo are two or three inches tall – a year or two old. 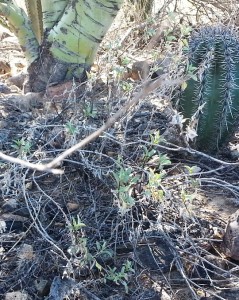 You can see the green “bark” of the Palo Verde tree in the upper left. It’s hard to find, but in the lower left corner are the spines of a very tiny baby, only half an inch tall. A one-foot Saguaro is on the right side of the photo.

Saguaros typically don’t grow their arms until they’re several decades old. The arms are needed for the blossoms – night-opening blooms pollinated by bats. The cactus can grow as tall as 70 feet and live as long as 150 years. 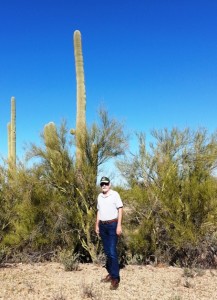 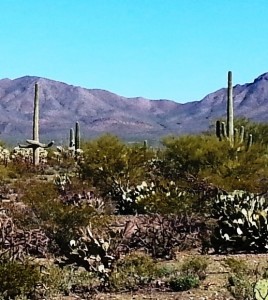 Hubs is just under six feet tall, and the Saguaro on the left is rooted in a gully behind him, so it’s close to thirty feet tall. We don’t know what anomoly caused the arms in the lefthand cactus in the next photo to grow straight out instead of up – winds? Drought? Genetic variation?

At the other end of the life cycle, we saw the carcasses of several of these fallen giants, their outer shells long gone and their long white inner spines exposed and lying in a log-like pile. Those spines are what holds the water – up to several tons, in a large cactus, able to sustain life through the long desert droughts.

When our Tucson friends first told us about hiking in the desert, I’ll confess it didn’t sound very inviting to me – I’m used to hiking in forests, surrounded by trees. But both of us are falling in love with this desert and its impressive diversity. I’m sure you’ll be hearing more about it in future posts.