We all know that the brain is the most important sex organ.

Losing my mind is one of my greatest fears when I think about aging. Both my parents were blessed – or cursed – with bodies that long outlasted their minds. My mother spent the last eight years of her life in a horrific haze, unaware of who she was or who we were, due to Alzheimer’s Disease. It’s in my gene pool.

So I’m all about finding and doing anything I can that’s been shown to postpone or reduce Alzheimer’s progression. I’ve written before about the tremendous positive impact of aerobic exercise on the brain – but there’s another half to the equation. All those new embryonic neurons that are bathed in growth hormones when we exercise won’t develop into full-fledged brain cells or get picked up in new brain circuits unless we’re also exercising our minds – learning new things, challenging the brain with something it hasn’t encountered before.

As with physical exercise, if it’s not something we enjoy, we’re less likely to keep at it. So hubs and I have turned to astronomy, chiefly for fun, but also as a challenge. Our night sky is a vast puzzle, filled with the familiar and the unfamiliar (to me). We’ve purchased a spotting scope, and in the limited library we can carry with us in our motorhome, we have three print books on the stars. I’ll say more about my favorite of these, An Intimate Look at the Night Sky, in a brief review below.

We’ve had fabulous clear nights in South Dakota, Nebraska, Texas and New Mexico as we’ve slowly trekked our way towards Las Vegas this summer. My childhood experience of the stars never went much beyond the Big Dipper, but we’re gradually coming to know the major constellations currently visible, where to find which planets, and how to locate some of the fascinating deep space phenomena. Several nights we’ve seen shooting stars – and known which meteor shower they were part of.

Do you know what zodiacal light is? I didn’t either (and you can look it up HERE), but I got up in time to see it on a clear morning last week, and was also rewarded with another shooting star, a stray from the Aurigids.

The challenges to my brain? Memorization, for starters – names in strange languages, classification, which bright star goes belongs to which constellation and where is it. Truly it’s like learning a new language – which is another highly recommended brain exercise. Then there’s translating the fractions of inches on our charts to the vastness of the sky dome, and moving back and forth from what I think I’ve seen to what the diagram looks like.

The rewards, of course, are far more than just new neuron circuits for my brain. Each time we go outside and look up, there is the gift of the overwhelming beauty and vastness of the night sky.  It’s a great couple’s activity, it can be incredibly relaxing and meditative, and it sure beats out watching TV. 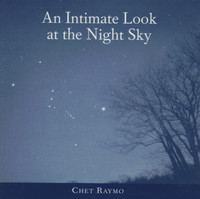 An Intimate Look at the Night Sky
Author: Chet Raymo
© 2001
Available in hardcover, paperback and Kindle at Amazon

In this lyrical book, physicist and professor Chet Raymo takes us on a profound journey through the visible night sky and the stories it reveals about the creation and history of the universe, our earth, and our very selves. With the voice of a Renaissance man, he pulls from our culture’s music, poetry, myth, and prose across the centuries to connect us with the constellations – stars from our own Milky Way galaxy – and the “deep space” phenomena from the farthest reaches of space and time. Organized by the seasonal changes in the sky, the book weaves simple instructions for locating stars and constellations with hard research and theoretical physics to explain what we are seeing when we look up at night. It may seem counterintuitive to talk about becoming intimate with something as vast as the stars in the sky, but this little book succeeds in creating an emotional connection as palpable as the dust of stars that makes up our physical bodies. I highly recommend this exquisite read.