This week I’m continuing my reviews of fiction about women across the ages who’ve had an impact on the history of the British Empire. Two weeks ago I reviewed Cathie Dunn’s novel Ascent, focused on the Viking invader Rollo’s hand-fasted wife, Poppa. Poppa is the great grandmother of today’s impactful heroine, Queen Emma.

When I wrote about Poppa, I was writing about a direct – although very distant – ancestor of my husband. Like so many Americans of British descent, his lineage traces back to Edward III, in his case through Edward’s son John of Gaunt and John’s mistress and later wife, Katheryn Swynford.

Queen Emma is not my husband’s ancestor, and the British royal line descends not from her but from her brother. Nonetheless, she and her children had a profound and powerful impact on the course of UK history. 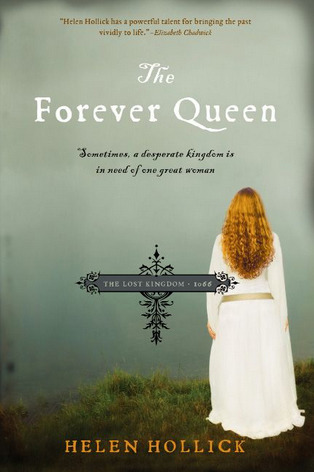 The Forever Queen, by Helen Hollick

Emma was but thirteen when her brother – the future Duke of Normandy – accompanied her across the channel from France in 1002 to wed King Æthelred, later known as Æthelred the Unready. Little could she know that as England’s future queen, she held in her hands both England’s rise to success across the middle decades of the century, and its fall to William the Conqueror, her grandnephew, in 1066.

Perhaps more is known about this pre-Norman queen than about any who preceded her, in part because late in her life, she commissioned a book about herself. One may need to take the details of that book with a grain of salt, but its broad strokes mesh with much that is documented elsewhere.

As Æthelred’s queen consort, Emma ruled England with him until his death except for a brief interim in 1013, in which the Dane Sweyn Forkbeard conquered the island and Æthelred fled with his family to Emma’s brother, by then Duke Richard, in Normandy. After Æthelred’s death in 1016, a son of Emma and Æthelred ruled briefly, but was defeated by Sweyn’s son Cnut the Great, who shortly married Emma; hence her title, the forever queen. She ruled with him until his death in 1032, and she was an active participant in the government of her two sons who succeeded him, Harthacnute and Edward the Confessor. Emma died in 1052. Counting her years as advisor to her ruling sons, Emma was central to English politics for nearly half a century, a ruler in fact if not in name.

Author Helen Hollick has taken these known and conjectured facts and delivered a compelling account of Emma, her inner world, her dilemmas, and her choices. In addition, she embeds this narrative in a rich and detailed presentation of Emma’s outer world – the backward state of England’s royal and liturgical structures, the complex medieval culture, the political interplay and some of its traitors, the powerful role of the Catholic church and its bishops, and the incessant Viking invasions.

The Emma who emerges is engaging, often admirable, sometimes devious, and clearly very clever to successfully navigate the swirling power plays that surround her. Is she a likable character? Yes and no. For me, Hollick succeeds in making us understand and empathize with her, so that even when she takes an action we might disapprove of, we know why. I found the presentation of her character and her era to be highly engaging and informative.

The Forever Queen: Sometimes, a desperate kingdom is in need of one great woman.