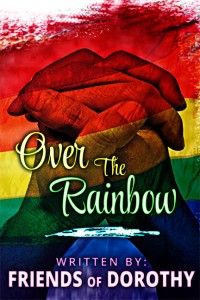 The last day of 2016 – how did your year turn out? It was a year of momentous choices, some good, some dubious. Among other things, hubs and I chose to come back to the writing we love. That decision definitely goes in our “good choice” column.

After a year-long hiatus, our first new release of 2016 was a lesbian romance short story, published in July as part of the Over the Rainbow anthology to support victims and survivors of the Pulse massacre in Orlando June 12.

Since that was an important choice-point for us, I thought we’d share Traci’s choice-point from that story. Traci plays shortstop on her State College Division III softball team, and she’s had a crush on her coach, Julie, since summer training camp her senior year of high school. This is their last game of the season. It’s the bottom of the ninth, one out, their team is ahead by one, but the opponents have runners on first and second.

Julie tensed at the sudden crack of the bat and the sight of the sharply hit ground ball heading past the pitcher toward second. “Yes!” she said to no one in particular as Traci Anderson dashed to her left, gloved the ball and flipped it to the second baseman, who spun and threw to first for the double play. A fast runner might’ve beaten the throw, but not the other team’s chubby catcher.

Instantaneously, the girls from the dugout scampered onto the field, yelling their heads off. Gathering at the pitcher’s mound, the players hugged and screamed their joy. Their season had ended on a high.

Since it was the last game of the season, Julie bided her time at the top of the dugout steps. Then, one by one, she hugged each girl as they came back to the dugout to pick up their belongings. It didn’t surprise her at all that her captain shortstop was the last one off the field.

“Great play, Traci,” Julie said, hugging her tight and thumping her back. “You’ve been such an inspiration for the team these past four years.”

Traci tipped her head back and beamed at Julie through tears. “Thanks. Sally had to make a great throw to first, too.”

“You’ve been a great tandem. We’ll miss both of you next year.”

Traci dipped her head against Julie’s shoulder. “I’m going to miss you, too. So much. You’ve been the inspiration. Really.”

Julie hugged her tight. She’d learned over the years that parting never came easy. “Don’t forget my party Saturday for you seniors.”

“Of course I won’t,” Traci said, pulling away. As if on a whim, she rose on her toes and brushed her lips lightly across Julie’s. “I’m no longer your student, you know. How does that feel?”

Before Julie had a chance to respond, the blonde sprite dashed off.

How does that feel? Traci no longer her student—or those lips? What the hell was that about?

Here are links to the Over the Rainbow Anthology, filled with some of the best LGBT authors, ranging from laugh-out-loud funny to serious tear jerkers. We must never forget.

All sales authors’ and original publisher’s proceeds from this Anthology will go to the following Charity:
https://www.gofundme.com/PulseVictimsFund

We’d like to give a special shout-out to eXtasy Books, who took on the task of editing, formatting and publishing the collection at no cost and are passing through all proceeds directly to the charity. Purchasing the book from eXtasy will result in more dollars going to victims than through any of the other vendors.

Our upcoming indie release, The Lady Wants More, is a lesbian short story we’re re-releasing this coming autumn, following the return of our rights.  Here are seven sexy sentences to get things flowing…

“Maybe we should’ve done this before dessert.” Brenda rested a palm on Janet’s pubic bone and splayed her fingers.

Janet could feel herself opening even more.

“So pink and steamy. This will be the treat of the night.”

Janet leaned back until she felt the coolness of the window, but that did nothing to quell the heat pouring from her body—from her head, from her nipples, and especially, oh so especially, from her core. She curled her fingers around Brenda’s ears, encouraging Brenda to explore, to take her time—no, to hurry. 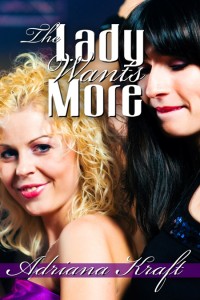 Subscribe to my monthly newsletter (upper l.h. sidebar) and leave me a comment to be entered for this month’s prize, a $10 gift certificate!

Click on the graphic below
to link to the other Sexy Saturday posts:

By now you know most of our books feature GLBT characters, so it’s no surprise that we’re all excited about Pride Month! We’ve been friends with author Beth Wylde for years and always look forward to the June events on her Yahoo Reader Group. She’ll be running special events almost every day for the entire month. Each Monday in June features one of the four GLBT  letters, and you can catch the whole schedule HERE. We’ll be participating with giveaways on the following dates – and here’s an extra contest, just for Newsletter subscribers: Catch me at one of Beth’s events and comment on something I’ve said, and you’re entered for your choice of a download from my backlist!

June 16 – Torquere Press, home to two of our lesbian pieces.

June 18 – B day. I can hardly wait – this is my personal fave, and with a new release coming out July 1st, I’m way pumped. Some special authors have already committed to join the party: Elizabeth Black, Louisa Bacio, Delilah Devlin and Giselle Renarde!

June 24 – Midnight Seductions. I’ve been part of this author group with Beth since a few of us founded it in 2007, and as always I’m excited about the range and quality of LGBT stories from members of our group.

Here are some of our GLBT books we’re especially proud of:

Here’s a peek at their first encounter – Brenda talks Janet into leaving the reunion and heading to one of their old hangouts where there’s a live band. The beat of the music has just shifted from fast to slow…

Gradually, Brenda’s hands slid down over Janet’s tiny rump. She felt Janet’s thong through the skirt fabric. She was surprised to discover her former lover had chosen such a risqué  undergarment. Brenda closed her eyes and nestled closer as Janet’s hands moved to rest on her rump. Although they never traveled lower, Brenda was thrilled to think Janet wasn’t totally uninterested. She wet her lips and peeked again at the rise of Janet’s breasts.

Here’s a link to another (spicer) excerpt and more about the book: The Lady Wants More