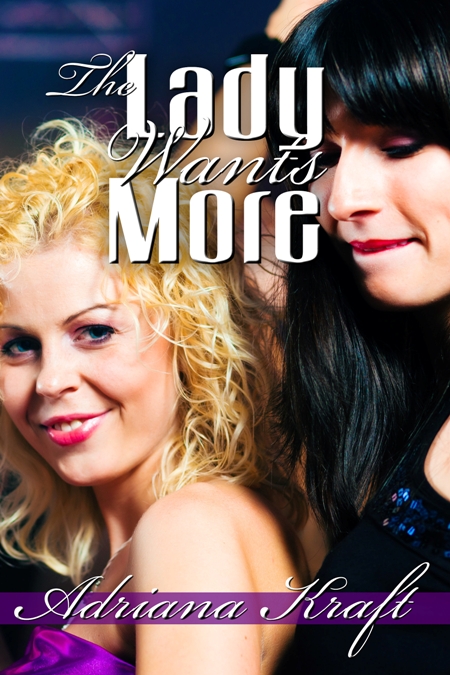 Mix Cancer with Aquarius? Like oil and water – but when level-headed Janet Baxter reconnects with free spirited Brenda Cassidy, the lady knows she wants more!

Five Stars: I loved these ladies! Building up the sexual tension between these two is the heart of this book. When they finally give in, I was right there with them. They are HOT!!!! Sheila G, Amazon

Adriana is interviewed about The Lady Wants More at Cally Jackson’s Hot Seat:

“Come on,” Brenda urged. “We used to dance all the time when we came here.”

“But…” She glanced at the couples on the dance floor. Three quarters of the couples were women.

Again Janet had the feeling Brenda was reading her thoughts.

Standing, Janet knew it was too late to avoid dancing. She closed her eyes. She loved dancing. She’d loved it ever since she was a little girl, when she’d started ballet lessons. And she wasn’t a bad dancer. But as she grew taller and taller, fewer boys wanted to dance with her.

Janet sighed and caved in to Brenda. With more than a little trepidation, she held Brenda’s hand and did her best to block out the other Eagle patrons. She tried not to think about what they might be assuming as she and Brenda made their way across the dimly lit room.