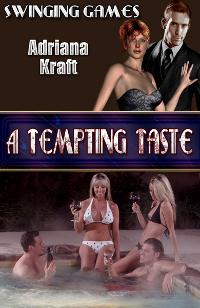 A little voyeurism, some role-playing, a taste of m/m, ménage for three and four – the swinging world is heating up for Jennifer and Brett Andrews!

Adriana Kraft has an eye for detail and likes to play that up, it works to her advantage. She writes fluidly, the story flowed well and the sensuality was very steamy. ~   MonicaBBB

Four Cherries  I  wasn’t sure what to expect when I started reading A Tempting Taste …my oh my, did I underestimate just how scorching hot those next seventy or so pages were going to be! …Another thing I was pleasantly surprised by is the ages of the protagonists. Brett and Jen are not your typical gorgeous twenty or thirty-year olds. They are in their fifties, and some of their “partners” are older than that. It was also refreshing to read, and is something that is rarely found. ~ Fern

A little voyeurism, some role-playing, a taste of m/m, ménage for three and four – is this more than they signed on for? No longer novices, Jennifer and Brett Andrews reach a little deeper into the swinging world. When the evening’s over, will they still go home together, and what will happen next?

Between giggles, Jen called out, “Ned, you better decide what you want us to do next. I can’t hold this position very much longer. I’m beginning to feel like a pretzel.”

“Patience, woman,” Ned chided. “The way Elizabeth is going after your pussy, you must be an incredibly tasty pretzel.”

Resting on her shoulders with her feet raised over her head and her toes nearly touching the mattress behind her, Jen toyed with Elizabeth’s ears as Elizabeth continued burrowing in and out of her sex with tongue and fingers. Both of them had come several times in the past twenty minutes or so. Just as Elizabeth was eating her, so was Brett eating Elizabeth. She’d heard his muffled groans sounding as if he was between agony and ecstasy. While he loved oral sex, he must be dying to sink his cock into Elizabeth. Ned hadn’t issued that command yet.