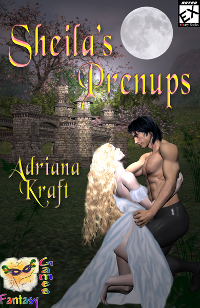 A pre-nuptial energy alignment? Her fiancé’s surprise gift pales next to the shocking announcement Sheila makes once the foursome returns to ordinary reality.

Night Owl Reviews: This was an interesting short piece that was kind of like a slim slice of strawberry shortcake – piquant, sweet, and yet ever so tantalizing. I went away from this with the over-whelming urge for more… sizzling ~ Kyraninse

What could be better than a full body massage and energy alignment offered by your fiancé and two of his best friends? Sheila Crawford jumps at David Piper’s invitation to join Sunny and Marlin Mower for the experience. The surprise they’ve prepared for her pales next to the shocking announcement she makes when they return to ordinary reality after their journey to the other side!

“Tactile heaven,” Sheila Crawford murmured into the pillows. She could distinguish six hands and thirty fingers skittering across her tingling shoulders, buttocks and thighs but was rapidly losing track of which fingers belonged to whom.

She lay covered with a sheet, face down on a mat in the center of Marlin and Sunny Mower’s room used for massage, energy work and journeying to other realities. Sweetgrass and sage filled her nostrils and lungs. Colorful blankets and mirrors graced the walls. Crystals and geodes sat on the fireplace mantel. Sounds of soft music, Celtic and native, drifted across the room.

Sheila fought the urge to doze. David hadn’t invited her to join his friends so she could catch up on sleep. She and David dabbled in energy work with each other, but Marlin was a master at realigning chakras and his wife had worked with some of the most revered shamans around the world. Sheila allowed herself to sink further into the evocative realm created by space, incense, music and touch, confident she was in expert hands.

She’d jumped at David’s suggestion to let the black couple explore her energy field. She’d met them once before at a cafe—before David had asked her to marry him. She’d been struck by how different the two had seemed. Marlin projected a relaxed, almost aloof attitude. Sunny had been more engaging and bubbling. Marlin was tall with a glistening bald head. Sunny probably didn’t stand much over five feet and possessed thick curly hair. Marlin had chocolate brown skin. Sunny’s was black as night. Both contrasted with David’s deep tan and her own ivory flesh.

Fingers kneaded her bottom. She yielded to their persistence, unable to retain tension in any muscle in her body. Marlin’s hands were large, as large as David’s. She couldn’t be certain, but she thought it was Marlin’s fingers caressing her buttocks while David used his knuckles to work on her spine. Sunny’s fingers, being smaller, were easier to discern. Sheila sighed, awash in decadence as Sunny concentrated on her toes, pulling on them one toe at a time.

A groan escaped Sheila’s lips. What would her three caregivers do if she melted away into the pillows? Disappeared before their eyes?

“You okay?” David whispered near her ear.

She smiled at his concern. “I’ve never been better. I may need my alignment checked regularly.”

She heard Marlin’s deep chuckle before David responded. “We’ll see about that. Maybe you’ll want to make it part of our prenup.”

“Right,” she moaned as Sunny’s smaller hands slid up over her calves to massage the back of her knees. “Like we have one.”

More warm oil pooled on her lower back and oozed across her rump. “Right now I’m floating.” She reached out and squeezed David’s knee. “This is a gift. Blow in my ear and I’ll follow you anywhere.”