Apparently I’m a sucker for good WWII books – particularly if they feature more heroism than gore, if they’re true, and most especially, if they highlight the amazing women whose efforts and support were so crucial for the Allied victory. The more I read, the more it becomes clear we could not have won the war without them, and I’m not just talking about Rosie the Riveter. 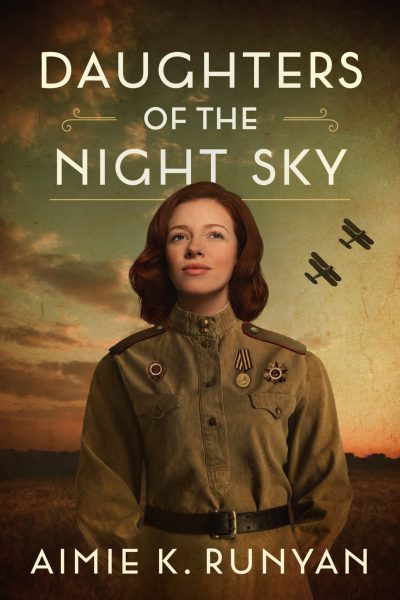 Lately I’ve hit several books that meet these criteria, and I’ll be reviewing them each in turn. Today, I’m excited about Russian women pilots.

The WWII stories about how we won most often focus on men, and especially on American men, or maybe American and British troops. Rarely do we hear about heroism on the part of our Russian allies – perhaps because for so many of the post war years, Communist Russia was a deeply hated enemy.

Based on meticulous research, author Aimie K. Runyon has penned a dramatic and satisfying novel on the role of a crack group of female Russian pilots. Here are the author’s words:

So often in history, we dismiss women’s work as secondary to men’s. The Night Witches were a shining example of women who defied expectation and served with immense valor. Once I heard about these remarkable women, I had to make their story my own.

Runyan’s lead characters are fictional, but they (and their exploits and dynamics) are based on the very real women who challenged the male hierarchy, excelled at the rigorous training, and carried out mission after mission up until the very end of the war.

These women conducted close-in bombing raids on enemy outposts at the front throughout the latter part of the war, moving ever eastward as Hitler advanced, and then finally following the front and destroying barracks, ammunition, supplies and machines  every time the front advanced west. I never knew.

Their planes were unarmed old training bi-planes—small, outdated, and in need of constant repair.

Every woman on the team knew how to maintain the planes, how to navigate, how to pilot. When one fell, another stepped in to fulfill that role. The size and relative silence of their craft enabled them to fly closer to the ground and drop their ordinance with higher accuracy. This also meant they were more vulnerable, unless they got in and out quickly. That so many survived is testament to their skill and bravery.

Runyan’s story traces a misplaced middle class daughter of a former professor, who with her mother has returned to a small eastern village after her father was slain during the Russian revolution. Now her mother is a laundress, and the daughter must struggle for her education in a backward milieu where women are only expected to clean, cook, have babies, and manage basic household finances.

The daughter’s fight has only just begun. Even though Stalin seeks to make all citizens “equal,” centuries-old traditions are deep set, and the women must study harder, learn more, and perform better than their male counterparts in order to advance. They do.

To give more details would be to create spoilers, so I’ll simply close by saying that I immediately engaged with the lead characters, wanted them all to succeed and thrive, but ultimately found myself satisfied with the author’s handling of what we all know war delivers. Well done.

You can read more about the unit on which Runyan’s story is based at this link, which also has marvelous photographs of the women and their planes: