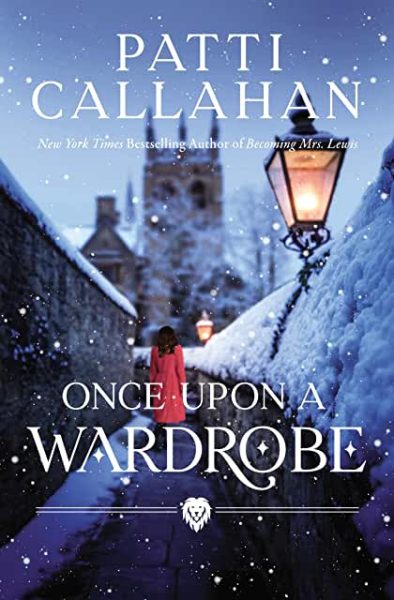 Did you devour C.S. Lewis’s Chronicles of Narnia series as a kid? Or perhaps, like me, you read the books out loud to a child. My husband and I started a chapter a night when our son was about 8 years old, after we’d all been enchanted by a community theater production of The Lion, the Witch, and the Wardrobe. For me, as an adult, the entire series was magical, alluring, and profound.

Once Upon a Wardrobe delivers the same magic. The author, Patti Callahan, came to study Lewis’s life and meet his surviving stepson when she embarked on her earlier book, a biography of Joy Davidman, whom Lewis married in 1956. In Once Upon a Wardrobe, Callahan brings us C.S. Lewis in 1950, shortly after the first publication of The Lion, The Witch, and the Wardrobe, which he wrote in about 1948.

She does so through the eyes of a fictitious terminally ill eight year old child, George, and his older sister Megs, a seventeen year old Oxford math and physics student who loves her brother fiercely. George has just read The Lion, The Witch, and the Wardrobe, and is desperate to know whether Narnia is real and where it came from. When he learns that its author teaches where his sister is studying, he insists that Megs find him and ask him those questions.

Megs is ever practical, driven by what can be observed, measured, counted. But she knows she must do this for George. Through the interplay between Megs, an Irish fellow student of hers named Padraig,  George, and C. S. Lewis, Callahan draws us into a world every bit as luminescent and profound as the series itself.

In the story, Lewis is more than willing to engage in dialogue with Megs and takes an almost fatherly stance. But rather than answer questions, he tells stories – his early childhood, the brutality of a British boys school, World War I experiences, hosting “refugee” children during World War II, conversations with Tolkien and the Inklings. Megs records as much as she can of Lewis’s stories and returns faithfully to share them with her brother, who is worsening.

The message, which Megs resists but gradually comes to accept, is that truth is not confined to what can be counted and measured. Fairy tales aren’t just for children. As Lewis himself put it in a New York Times essay in 1956, “Sometimes fairy stories may say best what’s to be said.”

Not a fairy tale in any sense of the word, Once Upon a Wardrobe brings Lewis’s purpose and perspective to light in exquisite and richly textured prose, creating an experience reminiscent of Narnia itself. An immensely satisfying and uplifting read.