For an author, there’s something magical about the day a book is officially published—and even after more than thirty novels and novellas, it still doesn’t get old. We are excited to announce the release of the fourth and final book in our Riders Up romantic suspense series set in the horse racing industry, Detour Ahead.

For those who’ve been following the series, you’ll remember Traci as the svelte, cool and collected lawyer who is Cassie’s best friend. In Book One, Traci took Cassie sailing for a day to help her heal from what looked like the end of her relationship with Clint.

It turns out cool and collected was a mask Traci hid behind, even from Cassie. Now in her early thirties, Traci works tirelessly as a prosecuting attorney. Her goal? Keeping rapists off the street. It’s Cassie’s turn to help Traci heal, though Traci isn’t sure she likes her friend’s M.O. 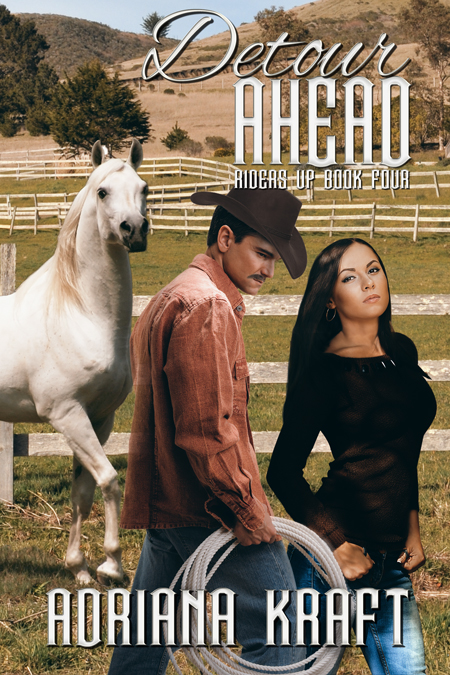 Hot-shot Chicago prosecuting attorney Traci Steele works tirelessly keeping rapists off the street to prevent other women from suffering the hell she’s endured, so she resists her friends’ insistence that she take a two month R&R in their California Live Oak condo—until they persuade her to help their rancher friend as a private investigator.

You Gotta Read Reviews Rich in romance and suspense, this book had me mesmerized from the first page. I was definitely drawn toward the main character, Traci, and all of the emotional barriers that she faced… a sensational job of combining just the right amount of suspense with a sauciness that leaves you longing for more. Run, don’t walk to your nearest book store for this sensational book. Val