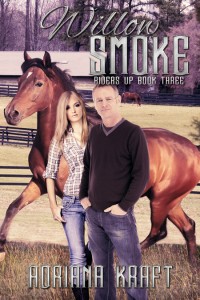 Daisy Matthews isn’t looking for love. She just wants to lose her virginity before her twenty-first birthday. She thinks Nick Underwood will fill the bill perfectly – he’s older, gentle, experienced, and from an entirely different world, so he’s “safe.” He’ll never even think of anything longer term with someone from the wrong side of the tracks who’s half his age.

But fate (and fiction writers 🙂 ) have a way of messing with the best laid plans. Here’s a snippet from just after their first time having sex:

“You make it sound like this is a one night stand,” Nick said.

Daisy stiffened under his gaze. “It is, isn’t it?”

He gave her his most wicked grin. “You think you’ll learn all there is about sex in one night?”

He propped himself up on an elbow and looked at her, memorizing every curve and nuance of her lusciousness. He stroked the inside of her thigh. She moaned. Brushing her trim curls, he said, “Maybe we could be lovers for a while.”

Her muscles tightened and he sensed her withdraw. “I don’t know much about love, and I’m not sure I want to,” she said, her voice thick with emotion.

“But you want to know more about sex.”

He’d have to treat her as gingerly as she treated an injured horse. “Okay, well, if I’m a passable teacher…” He waited for a response.