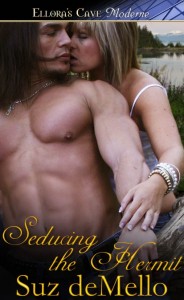 Seducing the Hermit by Suz deMello

Available in both print and digital formats!

Deejay Valerie Percy rejects the phony life she’s led in L.A. and travels to remote Takinsha Island, Alaska, determined to start over. She’s looking for a fuck buddy, an accessory she considers more important than mascara. She wants a warm, outgoing man to laugh with her, hang out with her and shag her silly. She doesn’t think she’ll encounter any difficulty in Alaska, where the odds of men to women are twenty to one. But as the locals say, the odds are good, but the goods are…odd.

Valerie falls for Fisher Chugatt, a loner who doesn’t do relationships. But Cupid has other plans for this couple, and so does Valerie. She doesn’t waste any time seducing Fisher. Sex in the shower, hummers on the couch and a spectacular encounter beneath the northern lights seal the deal in Valerie’s mind. Having fallen in love, she wants it all—home, husband, babies.

But shadows from his past may prevent Fisher from committing to anyone…Valerie included.

The ferry bumped against the dock, and she went below to get into her faithful V.W. bug and drive it off the boat. Packed with her belongings, Old Faithful had somehow crawled from Los Angeles all the way to Bellingham, Washington, where Valerie had boarded the Alaska Marine Highway, the ferry system to Takinsha.

She crammed herself into the small car, crowded with boxes and bags. Digging the key out of her purse, she started O.F. and slowly drove out, rolling and clattering over the ferry’s metal bib. When she emerged into the thin sunshine illuminating the dock, a box slipped from the top of the stack in the front seat. It fell, jamming the brake. “Shit!” She pumped furiously at the pedal, but O.F. kept rolling along the crowded dock.

Dammit, she couldn’t stop her car. Images flashed by her panicked eyes. Tourists jumping out of her way, cameras swinging like misshapen pendulums. Fishermen swearing as they dodged O.F. The crunch of crab pots and assorted other gear she couldn’t identify, not when it was being crushed beneath Old Faithful’s tires.

The tall, dark hottie she’d seen from the ferry turned, his eyes widening. Just before the bug rolled into him, he leaped onto the hood of her car, shouting, “Jesus fucking Christ!”

Scrabbling for a grip, he grabbed a wiper. It broke off in his hand. Swatches of angry red flagged the hunk’s furious face. He spread his hands on the window, plastering himself along it as best he could, bending his knees onto the hood so he wouldn’t lose a leg.

“Shit, shit, shit!” Screeching with dismay, Valerie dug her hand between two boxes to grab the brake below. Something snapped, probably one of her acrylic fingernails. She didn’t care. Thankfully, the car had stopped before it could inflict much more damage to the truck and dock, to say nothing of the hottie.

Like what you read? Find it here in digital format and paperback:

Best-selling, award-winning author Suz deMello, a.k.a Sue Swift, has written seventeen romance novels in several subgenres, including erotica, comedy, historical, paranormal, mystery and suspense, plus a number of short stories and non-fiction articles on writing. A freelance editor, she’s worked for Total-E-Bound, Liquid Silver Books and Ai Press, where she is currently Managing Editor. She also takes private clients.
Her books have been favorably reviewed in Publishers Weekly, Kirkus and Booklist, won a contest or two, attained the finals of the RITA and hit several bestseller lists.
A former trial attorney, her passion is world travel. She’s left the US over a dozen times, including lengthy stints working overseas. She’s now writing a vampire tale and planning her next trip.
–Find her books at http://www.suzdemello.com

–For editing services, email her at suzdemello@gmail.com

–Her current blog is http://www.fearlessfastpacedfiction.com

One Response to “Featured Book: Seducing the Hermit, by Suz DeMello”