“There she is,” April Day whispered to her husband as they shared a late breakfast in the fourth deck restaurant of the cruise ship. “There’s that vivacious girl who does everything in the floor show.”

“You’re infatuated with her,” Derek grumbled. “You’ve been mooning over her for the past two days. Do you even know her name?”

“Meg something, I think.” April thrust out her chin. “Names don’t matter much for what I have in mind.” April inhaled, letting her gaze take in the petite auburn-haired actress. “She’s a woman’s woman. That’s what matters.”

“How do you know that? She’s having breakfast with the guy who directs the show.” Derek chuckled. “She looks like a man’s woman to me.”

“How can you be so certain?” Derek’s features remained stolid.

Tell me About the Daytime Dreams #MFRWAuthor #MWTease

We’re continuing our back-list love with another excerpt from Writing Skin, Book Two in the series The Diary.

In The Diary Book One, Luci’s first long manuscript, a diary, was so successful her sister believed it and set off to pursue and halt the lecherous professor she was convinced had debauched her younger sister. In Writing Skin, Luci has just begun another manuscript, entitled Watching, and readers get a peek at it throughout the book. Here’s an early excerpt:

“But this is Jake’s idea,” Angela said.

Shaking her head vigorously, Edie protested, “He may have been the catalyst. In some sort of way, I suppose his raising the idea has given me permission to explore my inner self. I’ve often dreamed about being with you this past year.”

“Tell me about the daytime dreams.”

What would it be like to be romanced by not one but two potential partners, simultaneously? Luci Parker has finally achieved the career of her dreams as an erotica author – but the only romance in her life these days is in the books she writes. Long attracted to both men and women, Luci despairs of ever finding just one person to settle down with.

Owners of a South Side Chicago bookstore, Chai and Frank Ferguson eagerly devour Luci’s books as fast as she can write them, and now they wonder if she might be the woman they’ve been looking for.

Frank is deeply in love with Chai but knows she’ll never be complete without a woman to love as well. Can he match the passion of not one but two exquisite and complicated women at the same time? Will Luci even want him? And if Chai truly falls in love with Luci, will there be room for him?

Writing Skin is available in print in the two-volume series, The Diary, or solo as an e-book: 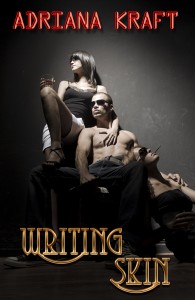 I’m sure you play the captive role superbly… #MWTease #MFRWAuthor

So much seduction – sometimes in A Woman for Zachary, it’s difficult to discern who is seducing whom. In today’s excerpt, we drop in on Josie and Meg, but who is the pursuer? They’re at a cafe after rehearsal…

Meg tingled as Josie’s dark eyes snapped at her. The taller woman’s long nose twitched and her broad mouth broke into a grin, suggesting that she enjoyed this stage of the game as much as Meg usually did. Still, Meg cautioned herself to tread carefully. She wasn’t accustomed to playing the role of being seduced. “So how long have you known Zach?”

Josie’s chin jerked up. Meg doubted the woman had been thinking about Zachary Cullen.

“Maybe ten years or so,” Josie said smoothly, showing no evidence of discomfort. “He sought me out after coming to a performance I directed. He’d heard on the street that I was particularly good with young talent and wanted to know if I’d help a young woman he’d discovered in Nebraska, I think.”

“So I’m not the first.” Meg scowled, hoping that wasn’t a look of sympathy crossing Josie’s face. “I didn’t expect I was,” she quickly added.

Josie shook her head. Her long flowing dark hair flipped from side to side. “You’re not the first, though you are only the third young girl he’s referred to me over that period. So there haven’t been hordes. Of course I don’t keep track of his activities. There may have been others he hasn’t brought to me, but I don’t know of any.”

“So what happens to these young women when Zach grows tired of them?” Meg’s fingers curled around a napkin, and she didn’t like the fact that she couldn’t keep the acid from her voice. She thought she was a better actress than that.

“Don’t get too upset with Zach. He doesn’t hold anyone captive.” Josie arched an eyebrow. “I’m sure you’re free to leave whenever you want to.”

“Of course I am.” Meg didn’t like Josie’s maternal tone. “When I ask Zach to tie me up, he only uses scarves.” Meg hid a smile when Josie’s eyes rounded and the woman involuntarily wet her lips. Maybe she’d remember why they were sharing a drink. It wasn’t for Josie to defend Zach.

Josie’s mouth turned up in a smile. “I’m sure you play the captive role superbly.”

A Woman for Zachary

Zachary Cullen has ignored Josette Patrice’s overtures for years, but she agrees to take on his latest protégé-slash-arm-candy Meghan Keenan in her off-Broadway workshop theater. Though the girl has incredible talent, Josie would stake her reputation on that little thing being a switch-hitter, like herself, and she doesn’t want Zach to be duped. Josie sets out to seduce Meg and expose her for what she is, but all bets are off when Meg turns the tables on Josie to hook her up with Zach.