Summer of Seduction On Tour #MFRWAuthor

These fabulous authors are offering wonderful giveaways. There are Amazon Gift Cert’s, ebooks, and a print book of Summer of Seduction up for Grabs. Please use the RaffleCopter below to enter. You may increase your chances of wining by visiting the other tour stops. You may find those locations here.

“Avoid the burn, but savor the heat of the season! Kick back in the shade with your copy of Nine Hot Authors – Nine Sexy Tales of Summer Sizzle!

Paul has loved Danny, his best friend’s little brother, since they were kids. Not willing to risk his friendship, Paul has kept his feelings well hidden, at least until a camping trip provides the opportunity he’s been waiting for. 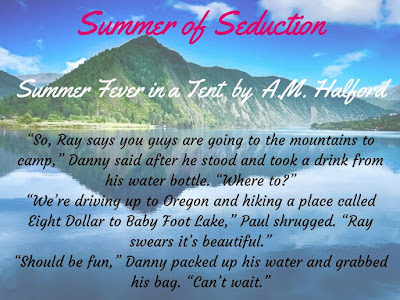 He watched as Danny tossed the football across the park, watching it spin in a perfect spiral before he caught it. The shorter man hooted and cheered himself on for his perfect form. Then again, considering how long Paul had been teaching Danny to throw a football, he’d better have perfect form by now.

Still, he couldn’t help but watch as the man jumped around, his ear length black hair bouncing around him. The sunlight glinted off it, reflecting with shades of red outward. His brown eyes were dancing happily as he turned to meet Paul’s gaze and held out his hands for the return throw.

Paul pulled his arm back, and let the ball fly, spinning beautifully and arcing across the summer sky as it came in for a landing right where he wanted it to. Danny’s arms. That radiant smile that met his own had Paul fighting with the same urge he’d had since he’d met the younger man ten years ago. Danny had been twelve then. Paul fourteen, and had just made friends with the man’s older brother Raymond. Ray was a cool guy, but Paul was completely certain the man would kill him if he ever got wind of the fact he held romantic, and sexual, desires for his “precious baby brother”.

The guy had a brother complex. Bad.

Danny jogged over to him and grabbed his water from the bag laying on the grass at his feet. In doing so he bent over, giving Paul the perfect few of the man’s small bubble butt and even a peek at his lower back as his shirt rode up just the tiniest amount.

“So, Ray says you guys are going to the mountains to camp,” Danny said after he stood and took a drink from his water bottle. “Where to?”

“Should be fun,” Danny packed up his water and grabbed his bag. “Can’t wait.”

“Wait, what?” Paul practically tripped over his own two feet as he tried to follow Danny. “You’re coming?”

“Something wrong with that?” Danny pouted.

Oh, gods! Not the pout. Every person alive was weak to that big lower lip and puppy dog look. Paul had seen Ray fold time and time again once it came out. Paul was no different.

“No, nothing’s wrong with it,” Paul found himself saying.

“Great!” Danny cheered before kissing Paul’s cheek and rushing back to their awaiting cars.

Paul let the feeling of another’s lips pressed against his skin linger for a moment before following him. Danny was overly affectionate with everyone. His kisses and hugs meant nothing special. He saw Paul as another big brother, and he hated it! How he wished sometimes he wasn’t Ray’s best friend and didn’t have that obstacle to contend with. Then maybe he could pursue his feelings for Danny more openly.

As it was though, these small stolen moments tossing a ball back and forth was the most he could hope for these days. Danny was a full-time student at the local college while Paul worked at his dad’s auto mechanic shop sixty hours a week, six days a week. Maybe having him come along on the camping trip would be a good thing? Perhaps if he saw a bit more of the energetic guy Paul could get his fill via osmosis or something.

He doubted that though. If that were possible then all the time they’d spent together prior to college and careers would’ve been enough.

Danny tossed his small bag in his car just as his phone rang. Paul tried not to glower at the sleek device. He knew who it was, and he wanted to pummel the guy with a tire iron.

A.M. Halford lives in Southern Oregon and enjoys spending as much time outside as she possibly can. Her partner and her often find themselves hiking with their two dogs when the weather permits it. Fishing, camping, and photography are also activities she greatly enjoy. If the weather doesn’t permit going outside she likes to curl up with a sketch book and draw whatever comes to mind.
A.M. Halford got into writing as an outlet for personal therapy and has since expanded that into a hobby and profession that she enjoys. She often writes down anything that comes to mind, combing through the ideas and expanding on plots that sound the most interesting. She likes to write believable relations between people overcoming unfair hardships set before them. She always loves a happy ending and no matter the hell her characters go through they’ll always get their forever person.
Social Links:
Website | Facebook | Twitter | Tumblr | Goodreads |
Bookstrand | Amazon

One Response to “Summer of Seduction On Tour #MFRWAuthor”