To enter for a free backlist book plus a special treat from Kellie, just leave a comment on the post. She’ll select a random winner January 1.

Vows, Sex, and Other Ways to Celebrate Love

As poly and ménage romance is becoming more mainstream, I wanted to write stories from my heart that people could relate to, not only for the erotic content, but to give voice to struggles and romantic relationships that are common. I believe there’s a ‘happy ever after’ for everybody.
Book 5 – Vows, Sex, and Other Ways to Celebrate Love – is a recap of all the couples in the series. We finally meet the parents of the family who are celebrating their long-term relationship in the way that suits them best. Although it throws a wrench into the party plans orchestrated by their children, love wins the day in the end. Here’s the blurb and an excerpt:

Love, laughter, and sex – the best ways to celebrate life.

The Harders don’t need monkeys, vegetables, chocolate, or sex toys to bend a few kinks into their well-laid party plans.  When the couple of the hour is a no-show, the siblings worry that their good intentions will have been for naught. Count on good old mom and dad to add a few surprises of their own, mixing a cocktail of love and laughter that no one will soon forget. Get ready to celebrate love, Harder style.

Marnie wiggled her ass. Drake took hold of her hips, and guided his cock to her cunt. He slid home in a slow movement. She loved being filled by his thick cock, and she loved that Madison didn’t mind sharing Drake. They’d been in a relationship prior to Marnie’s coming along, and for a short time, Marnie had worried that Madison would get jealous. Her fears had been for naught. Since the moment they’d all gotten together, they’d been able to make it work.

Madison clenched the comforter in her hands, head thrashing side to side, her shouts becoming louder. “Oh, oh, oh!”

Cream gushed out and coated Marnie’s hand and tongue. She lapped it up, and Drake fucked her harder.

“I’m coming, I’m coming!” he announced with each thrust.

Marnie whipped her head up as she and Drake came together. Legs shaking, she collapsed onto her knees, face buried in Madison’s pussy once more. Madison pushed her head away as a second orgasm erupted. “Stop, stop…”

“Agreed.” Marnie grinned at her, swiping the back of her hand over her chin. She glanced at the bedside table clock. “We’d better get going.”

“Yeppers.” Drake slapped Marnie on the ass, and she let out a yelp. “I’ve got dibs on the shower.”

“Oh come on,” Madison retorted. “You always call dibs on the shower.”

Marnie laughed. “If we share, we’ll never make it to the party on time.” She made a shooing motion with her hand. “Now get.”

Drake stuck his tongue out at her, and high-tailed it out of the room.

Marnie sighed and pushed up to a stand. “You want to go next?”

Madison patted the bed beside her. “Sit for a second. I want cuddles.”

Marnie plopped down beside her, and ran her fingers through Madison’s hair. Love for her filled her heart once more. “I want to ask you something.”

Madison twirled a strand of Marnie’s chestnut hair around her finger. “What’s that?”

Marnie smiled. “Having you and Drake in my life, helping all of us with the party prep, got me to thinking.”

“Like maybe we could have a ceremony some time. Or a party. Some kind of thing to celebrate all of us being together.” Her heart tripped in her chest at the admission. “I love you both so much and I want everyone to know it.”

Madison cupped her face in her hands. “I love you—we both do. I think it’s a wonderful idea. In fact…” Her voice trailed off.

Curious, Marnie held Madison’s face in her hands. “What?”

Book 1 in The Harder Series is availabler FREE at Extasy Books! 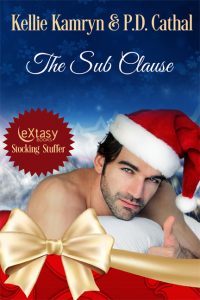 On December 25th, my writing partner, P.D. Cathal, and I have a Christmas release with eXtasy Books – The Sub Clause. Find out how Santa Clause and his Head Sub Elf celebrate finishing up the busiest night of the year by being naughty!

When you’re a ho-ho-ho for Jolly Old Saint Nick, not reading the fine print of your contract is a no-no-no.

The Naughty Toy Workshop is the kinky toy factory for people who hit Santa’s naughty list, and Kandy Kane loves her job as supervisor. The coveted position includes person-ally testing sex toys, observing those under her command as they research and test new items for this season’s fetish crowd, and the best perk—being The Big Guy’s submissive for the year.

Jolly Old St. Nick has never had a better sub than Kandy to supervise his naughty workshop or fulfill his most kinky desires. With glee, he can’t wait for the night of her performance review, where he has some special plans to reward his sub once the busiest night of the year is complete.

As the big night draws near, Kandy looks forward to her performance review with a mix of exhilaration and sadness. According to the sub clause in her contract, she has to choose her successor from one of the sub-elves in training in the workshop. Little does she know she’s misread the clause, and Santa is about to school her on the finer points of her contract.

A wistful sigh escaped Kandy’s lips. Both subs would make excellent replacements for her. A lump formed in her throat, and she swallowed it back, refusing to shed tears over a fact she’d known since she’d taken the job. A sub clause in her contract with Santa stated that at the end of the year, she had to choose her successor. That knowledge had been the one thing that popped a hole in her balloon of elation over being chosen for the job last year when Santa’s last Alpha Sub retired.

She pushed the intercom button. “All right, Sweet—page me if you need anything. I’ll be going to—”

An emergency alarm sounded. All three women stared at each other in bewilderment.

“What the hell?” Kandy mumbled.

“Oh great,” Kandy muttered. “Sweet—help Donna. I need to see what this is all about and take care of it before Saint Nick finds out. He’s got enough to worry about.” At the thought of her boss, Kandy’s heart rate sped up. She tried her best every day to serve him as his sub and workshop supervisor. Anything she could handle for him to make his job easier, she did.

Kandy suppressed a smile at the thought of Santa. While she’d enjoy seeing him again and being used by him—one of the best perks of her job—it was the busy season, and she wanted everything to run ship-shape. She gritted her teeth together to keep from grinning. They didn’t call him The Big Guy because his belly shook like a bowl full of jelly. Her cunt ached at the thought of his big, fat cock.

“Are you okay?” Sweet asked.

Kandy cleared her throat. “Yes, I’ve got to run.”

“Thanks.” Kandy rushed from the room and sprinted down the hall to Fungeon Eleven, the testing room for new Sybians. She burst into the observation room and stared at the sight through the glass. A runaway Sybian that resembled a child’s rocking horse was vibrating around the room like an out-of-control mechanical bull, its test rider hanging on for dear life. Two other elves were chasing it around the room in an attempt to tame it. With its erratic action, neither elf could reach the power cord to unplug it.

Good thing she’s tied to it so she can’t fall off! Kandy’s brain went into overdrive. She whirled around and spied the emergency breaker panel at the back of the room. It would shut off power to this section of the workshop only. She bolted toward it and ripped off the front cover, then flipped the switch. The room descended into darkness, the alarm shut off, and the vibrating noise from the other room ceased.

Kandy breathed a sigh of relief, then glanced around when the emergency lights flickered on. The green glow of the lights cast eerie shadows all around. Kandy hurried into the testing room and helped the elves untie the sub from the horse. Then she unplugged the machine from the wall so they could restore power without the Sybian starting up again.

By the time she’d finished, the two elves—Lexie Latex and Sadie Sadist—had the other sub, Vivian Vibrato, untied from the machine and wrapped in a blanket. They held her close, murmuring words of comfort.

Kandy walked over to the trio and rubbed Vivian’s back. “Are you okay?”

All four women stared at each other, then burst into laughter.

Kandy patted her back and gave her a kiss on the top of the head. “I told Santa this idea needed more work. I’m glad you’re all right.” She straightened up and gestured to the control room. “Let’s get out of the testing area and back into the other room where we can look at the findings and see what went wrong.”

All three subs nodded in unison. Lexie and Sadie helped Vivian to her feet, then they followed Kandy into the control room. Kandy startled when the lights came on.

A deep voice spoke from the back of the room. “Ho, ho, ho… Who’s been a naughty elf?”

All four women stared at each other, then burst into laughter.

Kandy patted her back and gave her a kiss on the top of the head. “I told Santa this idea needed more work. I’m glad you’re all right.” She straightened up and gestured to the control room. “Let’s get out of the testing area and back into the other room where we can look at the findings and see what went wrong.”

All three subs nodded in unison. Lexie and Sadie helped Vivian to her feet, then they followed Kandy into the control room. Kandy startled when the lights came on.

A deep voice spoke from the back of the room. “Ho, ho, ho… Who’s been a naughty elf?”

The Sub Clause will be available at the Extasy Books Stocking Stuffer link on Christmas Day, December 25:

Winner of the RONE (Reward of Novel Excellence) Award for Best Erotica 2012, Kellie Kamryn has many 5-star reviews from sites such as Night Owl Reviews for her work in contemporary romantic fiction. In 2013, one of her novellas was nominated for Best Novella for the RONE Awards. In addition, she is a workshop presenter and an online columnist for The Aquarian Online.

All of Kellie’s books contain a lot of heat balanced with an abundance of heart. With fourteen books and two anthologies to her credit since 2011, most days she can be found channeling her heart’s desire into writing stories and poetry that sweep readers away into other worlds.

When her muse requires a change in scenery, she funnels her creative energy into bringing many a tale to life through her work as an audio narrator. And when her body demands attention, you can find her in the gym jumping on the trampoline in between teaching Kindergym classes, or training and co-teaching Baguazhang (Bagua) as self-defense to women/families, and for health and healing to individuals on the Autism spectrum.

Visit with her at: www.kelliekamryn.com

Don’t forget to leave a comment to enter for Kellie’s giveaway of one free backlist book and a special treat!