We’re continuing with teases from All You Need is Love, the Limited Edtiion GLBT Boxed set available for just $.99. 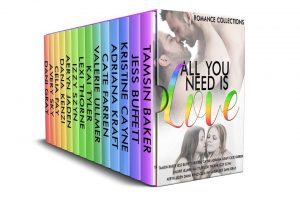 Seeming surprised, Nate took a moment to respond. “If you’re sure? I don’t want you to feel as though you have too.”

Brody nodded. “I’m sure. There’s a new café I saw that must have opened up a while back. On the main strip. Hotshots. You heard of it?”

“Yeah, I know Hotshots,” Nate said with a chuckle. “It’s almost like a morning ritual for me before school to drop in there now. Skye and Brandon definitely know what they’re doing when it comes to coffee.”

“I had been told those two opened up a place. I know them pretty well. Brandon’s older brother Isaac and my brother Emmett are close friends. They work together.” Taking the steps necessary to fall in line with Nate, they cut their way through the forest toward the old highway where he had parked his car before heading off into the preserve. “Both of them were a couple of years ahead of me. You wouldn’t have met them back then since they graduated the year before you started teaching.”

Brody winced at the memories that particular comment brought up and looked out into the forest, at anything that meant he didn’t have to maintain eye contact.

An awkward silence settled on top of them until they finally reached their cars, and while he felt a slight relief in the break of tension by parting ways temporarily, another side loathed to let Nate out of his sight.

“I’ll meet you there,” he offered in parting as he moved towards his car.

“Are you sure you don’t want to head home and shower first?”

“Nah. I’m good.” He shrugged and opened the driver’s side door. Truth be told he was a little afraid that if he didn’t seize this moment now that Nate would change his mind, and that was the last thing Brody wanted. Seeing Nate uncertain, Brody sighed and bit the bullet, getting straight to the heart of it. “It’s just coffee, Nate. No expectations. Just coffee.”

Nate nodded with a small smile as Brody gave him a quick wave before folding into his jeep and slamming the door shut.

The roar of the engine startled Nate out of his daydream as Brody sped off down the dirt road that led to the main highway and back into town. He felt the smile on his lips turn into a full-fledged grin, ignoring the hint of panic at the idea of spending time with Brody.

And damn, had he grown up good.

Brody had grown even taller in the last few years, giving him a more masculine appearance now. Gone was the smooth, baby-faced look, replaced by day-old scruff, a chiseled jaw, and biceps big enough that Nate had no doubt the other man could lift him if he was so inclined.

He flushed at that last thought.

Nate noticed another particular feature that was new to Brody. A rather large tattoo snuck out from the edges of his T-shirt, making Nate curious as to what it looked like in full.

“Focus, idiot,” he muttered to himself.

Brody Jamerson returned to Woodport sure of three things. It would only be temporary, his future was in the city, and he would avoid his old high school teacher and crush, Nate McCallister, at all costs.

However, with the help of a nosy but well-meaning baker and a hyperactive cafe owner, Brody may find that in a town known for its second chances, he might just stop running in circles long enough to find where he really belongs. Jess Buffett was born and raised in New South Wales, Australia. Jess is a mum of two, married to her high school sweetheart. She is a hopeless romantic who is a huge fan of M/M and M/F romance with a happy ending—anything with hunky men in all their glory, whether they be Shifters, Vampires, Cowboys, or the boy next door. A caffeine addict who shamefully can’t make a decent cup of coffee to save her life, Jess believes in soul mates, happily ever afters, and in love at first sight, but that sometimes people need a second or a third for the brain to catch up.

And be sure to check out the teases from the marvelous authors below!