Mortimer’s life is set in stone. That is until he takes the reins and rejects his crown and his namesake. Striking out on his own, he discovers a whole new world and a whole new him. But even with all of the newness, falling in love is still his greatest dream.

Then he meets Galen. He never planned on falling for a man who stands for everything he’s not. Now he just has to deal with the significance of his birthright.

I fell into a hole.

I know, stellar move there. I was such a graceful individual. So graceful that I’d not only fallen into a hole, but I managed to sprain my ankle. Hopefully. I couldn’t tell for sure, but based on how painful it was, and how I could literally put no weight on the joint, I was betting it was broken. Only a fool would fall into a hole and break his ankle and thus remove any hope he had of getting out of said hole.

“Help!? Anyone up there?” I called out again for what seemed like the hundredth time. The sun had gradually been crawling along the sky so I knew I had to have been here for some hours, thank the living dead that night hadn’t fallen yet.

Alas, with no sign of passers-by or any fellow travelers that might take a moment of their day to aid me, I might have to think about this pit with its dirt and worms as my bed for the night.

And hope no wolves come for a snack.

Perhaps I should have stayed home and done as I was told. Those fairy tale stories made running away from a great destiny seem simple, and easy. I guessed reality must ever grind down on the mortals of the world to remind them they are but prisoners to fate on its plane of existence.

“Please! Someone! Anyone–help!” I cried again, despair thick in my voice. No one would hear me; what was the point? I was about to slump back against the dirt walls of my pit when a shadow danced along the side–and did the wind rustle the grass? Or was that the stepping of light feet? I eagerly pressed myself up against the side of the hole where I saw the shadow milling about. “Hey! Hey down here! Please help me!”

My hopes were dashed when two furry ears and a face of white whiskers greeted me. The accompanying ‘Maow’ crushed my heart.

“Oh, hello, adorable.” The cat was striped, black and white contrasting in defined lines across its face. The white whiskers wiggled as it ‘maow’ed’ down at me again, and I smiled despite my despair.

Cats always had an affinity for death and those of us who worked with it.

“Hey, sweetie—do you have a master? Hm? Someone who can pull me out of this pit? Anyone nearby to hear your small meows?”

“Maow!” the critter called down while its striped tail swayed behind it.

The cat gave a trill and wandered away. My shoulders slumped as I took in my earthy prison. I guess I’d better make myself comfortable for the night, and try to find a stick or something as a weapon… Maybe one of the tree roots was hard enough to use as a blunt force weapon…

While I was hopping over to the other side of my dirty sanctuary the cadence of someone yelling echoed down the pit. Faint—but most assuredly a human’s voice.

“Hello! Over here! Please help me!” I bellowed, attempting to make my voice go as far as possible.

“Blasted pet–what are you doing? Stop tripping me!” Did the cat find help? Was that something a cat could do?

Not possible. But despite possibilities and probabilities, a petite black and white striped head with whiskers and big fluffy ears popped up again and gave me a friendly “Maow,” while its tail swished. I smirked, awkwardly because now I heard heavier, human footsteps approaching. And while that should spell my freedom from this forsaken hole, it meant interacting with another person.

I wanted out of this pit, of course, but my social graces were rusty to say the least. The mere idea of speaking and interacting with another person was a daunting task now. Hopefully it was some old man who would offer me a ride in the back of his potato wagon so that we didn’t have to speak so much while he took me to the nearest town…

The figure that appeared beside the striped kitty was not that of an old man. Oh no, I would never be that lucky. No, my fate was cruel and instead of some crotchety old man with beady, pale grey eyes and scruff for hair, a pair of golden-brown eyes met mine, a solid frame, square jawline. Skin that had been kissed by a thousand suns, thick, dark hair…and a furrow formed between two fine eyebrows as he startled at seeing someone very much alive in this hole. 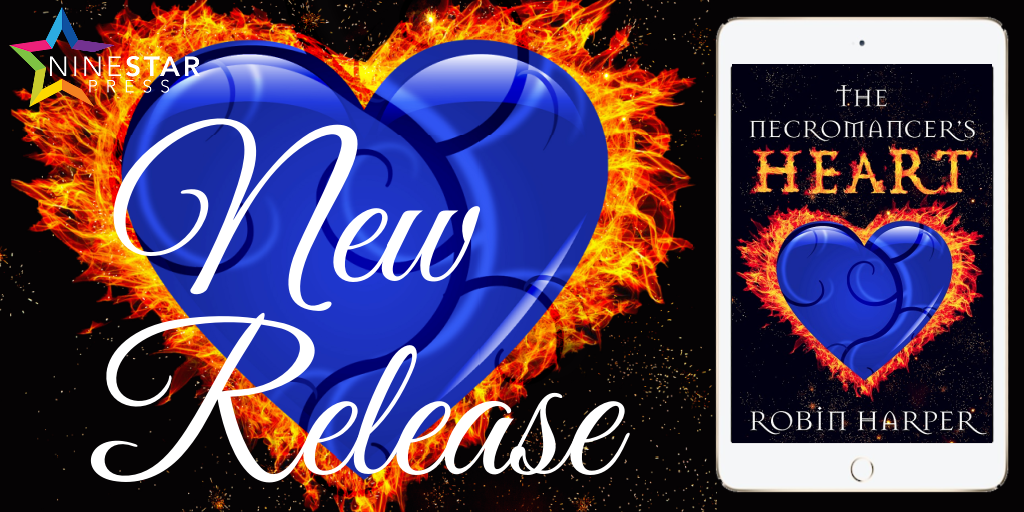 Robin Harper is a bisexual, polyamorous witch who lives with her husband and two sweet ginger cats in the cold northern state of Minnesota. She finds joy in creating stories about love, and healing, as well as weaving ghost tales and supernatural encounters. She is also an avid reader, an optician during the day, and a lover of coloring books.