Beverley is giving away a $10 Amazon Gift Certificate to on lucky winner. Please use the Rafflecopter below to enter. Remember you may increase your chances of winning by visiting the other stops on the tour. You may find those locations here.

A seven-year secret. A tragic misunderstanding. Can love outwit fate in this twisted tale of misadventure and thwarted dreams?

Earl Quamby’s niece, Katherine, and Jack, a foundling home lad adopted by a local family, have been loyal friends for as long as they can remember.

As Jack is about to leave England to make his fortune and Katherine is being courted by two eligible suitors, they unexpectedly realise their friendship has blossomed into passionate love. A love, they are warned, that has no future.

Despite a brave attempt to defy the forces keeping them apart, tragedy results and the pair is separated.

When chance throws them together seven years later, Katherine, newly widowed, is being pressured into a marriage not of her choosing to avoid scandal and Jack feels he must honour his pledge to the worthy Odette whom he met in India and whose father is dying.

Katherine knows that revealing a long-held secret may win Jack to her but she also knows conflicting obligations from past and present may tear him apart.

Can master matchmakers, Fanny, Antoinette and Bertram Brightwell, outwit fate in its latest attempt to keep these star-crossed lovers apart and deliver them the happiness they deserve?

This is Book 4 in the Scandalous Miss Brightwell series but it can be read as a stand-alone. 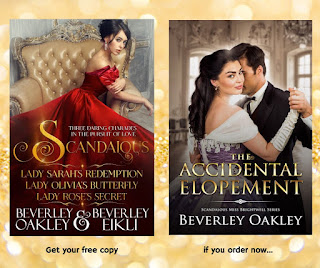 Order The Accidental Elopement now for the special price of $2.99 and you’ll get an ecopy of Scandalous: Three Daring Charades in the Pursuit of Love. Just send a screen shot of proof of purchase to beverley (at) eikli.com and she’ll send you the link for your free book.
Amazon Buy Link

Excerpt:
In this excerpt, Katherine is hiding in a dark corridor to avoid dancing with someone she has no wish to see during her first ball as a newly arrived London debutante. She then receives a rude shock!

Other Books In The Series:

Rake’s Honour (Book 1)
Beautiful, impoverished Fanny Brightwell has a few scores to settle—and a heart to win—before she can secure the wealthy, aristocratic husband her ambitious mama demands.
Pick up a free copy here!

Rogue’s Kiss (Book 2)
Would a potential suitor be bolder if he were told the lie that the maiden he desires has only six months to live?
Amazon Buy Link

Devil’s Run (Book 3)
A rigged horse race – with a marriage and a lost child riding on the outcome.
Amazon Buy Link~*~*~*~*~
About the Author:

Beverley Oakley was seventeen when she bundled up her first her 500+ page romance and sent it to a publisher. Unfortunately drowning her heroine on the last page was apparently not in line with the expectations of romance readers so Beverley became a journalist.Twenty-six years later Beverley was delighted to receive her first publishing contract from Robert Hale (UK) for a romance in which she ensured her heroine was saved from drowning in the icy North Sea.Since 2009 Beverley has written more than thirteen historical romances, mostly set in England during the early nineteenth century. Mystery, intrigue and adventure spill from their pages and if she can pull off a thrilling race to save someone’s honour – or a worthy damsel from the noose – it’s time to celebrate with a good single malt Scotch.Beverley lives with her husband, two daughters and a Rhodesian Ridgeback puppy the size of a pony opposite a picturesque nineteenth-century lunatic asylum. She also writes Africa-set adventure-filled romances tarring handsome bush pilot heroes, and historical romances with less steam and more sexual tension, as Beverley Eikli.