It’s here! The Unmasking is live at Amazon.com! 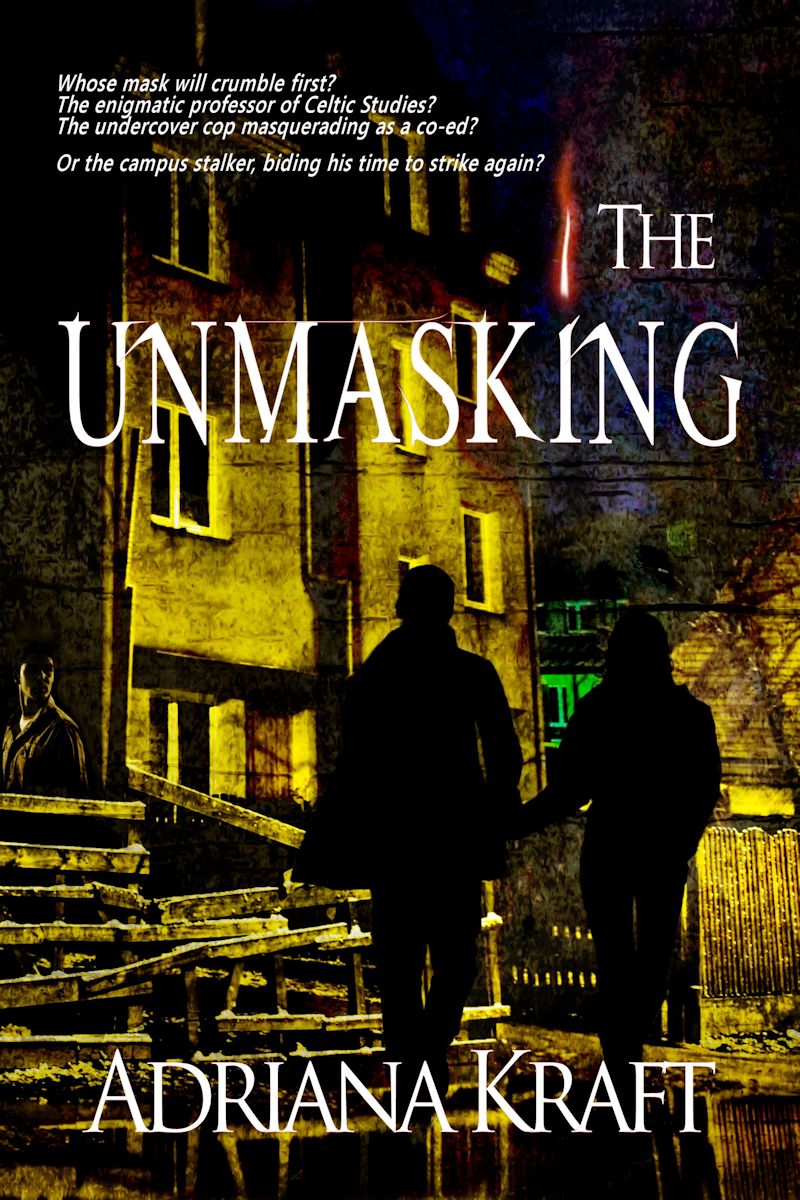 It’s All About the Research

The research my husband and I engaged in for this spicy romantic suspense is a little different – some might say, it’s been our entire lives. We’ve both taught at universities (that’s where we met) and we know the academic life from the inside. The choices and struggles faced by our professorial hero, Anthropologist Matt Bayfield, are more familiar than we might like to admit.

Hubs is a sociologist with a specialty in criminology. I promise he’s drawn on this background immensely in creating our spunky female undercover cop, Nancy Appleby, in plotting the trajectory of the crimes and the mystery of solving them, and especially in understanding our truly creepy villain (who I won’t name, of course – that would spoil everything!).

We’ve both immersed ourselves in understanding Celtic culture and history for years – long before we envisioned this novel. Hubs has Welsh roots, and mine are Scotch-Irish on one side, so we feel an ancestral pull to that era and its understanding of seasons and cycles. It was easy to hand that passion over to our ersatz professor. We won’t say more about how it’s woven into the plot, but we think readers will like it.

We had a close call researching the technology we’ve given our resourceful cop – hubs found himself on a website requesting security clearance for more information. Backed right out of that one! But we found what we needed to know without tripping any more alarms.

The North Woods, where we’ve set the novel? A place we’ve lived and loved, and left, when the winters grew too much for us to handle. But while we lived there, we threw ourselves with a passion into the cross country skiing, snowshoeing, and crisp winter outings Nancy enjoys so much. Writing those scenes was like watching snippets from our own life on the screen.

The Unmasking was originally released in 2008 under a different pen name; rights reverted to us when the contract ran out, and we’ve decided to re-issue it as “ourselves.” We’ve thoroughly re-edited the book and incorporated helpful feedback from our beta readers

Four and a half stars at Romance Junkies: From beginning to end, THE UNMASKING is a fascinating tale…I was intrigued at how the writing team is able to intertwine a love story with such horrifying circumstances in startling clarity. One of the many things I adored about this story is that the main characters are flawed. They both make judgment errors and their mistakes and assumptions lead to some emotionally trying scenes that had me eagerly reading to find out how they were going to solve their conflicts – or at several points if they even would be able to remain together. If you enjoy romantic suspense novels then I can definitely recommend THE UNMASKING. Chrissy D.

Five Stars at Amazon: One of the best stories ever written by Adriana Kraft…a truly great read. Could not put it down until I finished it. Amy B.

Five Stars at Goodreads: The suspense is so well done you don’t know who the bad guy is until it’s revealed in the book. The action is fast paced and kept my interest to the very end. Could not put the book down. Donna H.