A Ring for Christmas

Set-up: Sometimes showing is more powerful than telling. Since both Meg and Lisa are actresses, they’ve told Bryce they need a photo shoot for some upcoming plays…

Hearing the women enter at last, Bryce looked up from his work. He blinked. They were dressed alike. If one wasn’t a redhead and one a blonde, they would’ve been difficult to tell apart. They wore very short wrap-around green skirts trimmed in yellow. Bare midriffs were set off by sheer white tops. Clearly neither wore a bra. Meg’s nipples were darker than Lisa’s. Lisa’s nipples stood out, as if she was turned on. Their feet were adorned in tiny felt boots.

Bryce wet his lips and tried to steady his breathing. He smiled as each woman placed a matching green elf-like hat on the other woman’s head.

“Merry Christmas,” they said, turning to blow him a kiss.

“Do that again,” Bryce said, grabbing his camera. “I wasn’t prepared for your grand entrance.”

Bryce snapped pic after pic as the women knelt on the couch facing each other. They giggled and played a patty-cake game. Their boobs rose and fell in unison.

As if one, they turned to face him, “We’re Santa’s helpers. Have you been naughty or nice?” They leaned forward and brushed lips. Again, looking back at him they sang out, “We’ve been nice and naughty. Can’t you see?”

Bryce didn’t think they expected a response from him. Maybe their intended audience would laugh, cheer and applaud. He moved about, getting pics from as many angles as he could manage. Damn, they looked enticing. Bryce shook his head, hoping his cock wouldn’t move beyond half-mast. At least he had on loose-fitting trousers.

Through the lens he watched the two women hug, crushing their breasts between them. In that pose they turned and winked at the camera. He watched Lisa lower a hand to cup Meg’s ass as Meg did the same. Their skirts scrunched almost to waist high. Bryce blinked. He thought they’d worn thongs, but now it became quite clear if those outfits came with thongs, they’d been left in the dressing room. Bryce swallowed. What kind of play was this? And why did Lisa look so natural hugging—no, making out with a woman?

Lisa looked at him. He saw her inhale sharply before she spoke. “Naughty can be lots of fun.” 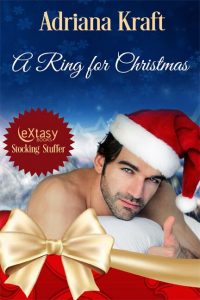 Title: A Ring for Christmas