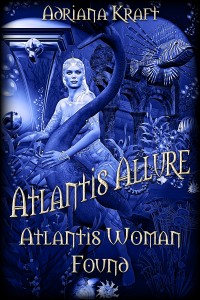 A sexy office fling? Yes! Lifemates in Atlantis? Be careful what you ask for!

Struggling to keep her eyes shut, Cheri London wrapped her long legs around Alex Dawkins to keep from sliding off his office desk as he pummeled her incessantly. Staring too long into his eyes had gotten her into this position in the first place. She’d left her faculty office for his to turn up the heat on the ribald banter they’d enjoyed over the past weeks. She hadn’t expected him to plop her on his desk, shred her panties and plow into her as if there were no tomorrow.

She panted, keeping pace with his ferocity, then laced her fingers behind his neck and kicked her heels against his butt. Maybe he’d been right. Maybe they had put this initial mating off for too long. She’d never known a cock to be so scorching. It had seared her like a hot poker. She’d thought the burning sensations were because neither one of them had bothered with foreplay. But his thick girth still scalded, setting her ablaze over and over.

His warm breath caressed her face as he relentlessly pounded her ass into the desk. “Come with me, Cheris,” he growled.

Aware of the faculty office next door, Cheri squealed softly. She shifted slightly on the hard surface to give them a better angle then met him thrust for thrust. She hardly needed to be ordered to come. She was well on her way. The surprising professor propelled her toward a pinnacle she’d seldom visited. And she was so ready. “Take me,” she grunted, raking her fingernails across her lover’s shirt. “Take me over the top.”

“Oh yes,” she sighed as she soared beyond time, beyond place, beyond reality, nursing an orgasm like no other. Gradually her panting turned to pleasure moans, then to deep breaths. Her finger pads soothed Alex’s firm bare shoulders. He settled her buttocks on a soft surface.

Bare shoulders? Soft surface? She couldn’t feel the desk. Her eyelids sprang wide open. Alex’s look of triumph thrilled her. Then she began to take in her surroundings. Her mouth fell ajar. She was lying at the foot of a very large bed in an extremely large room decorated in some sort of light blue and white marble. Stark naked except for a golden armband on his right bicep, Alex stood at the edge of the bed still gloriously impaled in her vagina. His massive swarthy chest hardly showed any signs of the exertion they’d just shared.

“Don’t be afraid,” he said soothingly, gliding slowly in and out of her. “You came with me.”

On the prowl for a sizzling office rendezvous, Anthropology professor Cheri London knows just who she wants—that sexy professor down the hall.

A true Atlantian, Alex Dawkins seizes the moment and stakes his claim on the woman he knows was made for him.

All bets are off when Cheri wakes up in Atlantis.

Subscribe to my monthly newsletter (upper l.h. sidebar) and leave me a comment to be entered for this month’s prize, a $10 gift certificate!

Click on the graphic below
to link to the other Sexy Saturday posts: