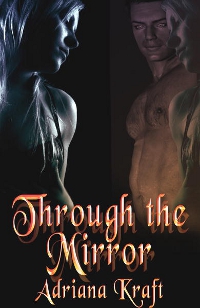 Lacy Hogan’s mantra: hot sex, zero commitment. But Doug Forsyth demands her all before revealing his trump card—can she trust him with her heart?

“Through the Mirror is definitely one I can recommend for your bookshelf.” ~ Samantha Ann

Adriana talks about Through the Mirror in this Author Interview

Anthropologist Lacy Hogan likes her sex hot, fast and furious, with no strings attached. Why then is she so drawn to Doug Forsyth? Their mating dance has gone on for months and their lust is mutual, deep and torrid.  But he scares her—she’s sure he’ll want much more than just sex.

Lacy is in for a surprise she could never have envisioned, but the ultimate winner is the reader who comes along for the journey!

“You seem pleased with yourself,” Lacy said, twirling spaghetti around a fork. Doug had been rather subdued since dropping by for dinner. And there was a smugness about him she didn’t like. Surely, he wasn’t already taking her for granted.

“Shouldn’t I be?” His eyes sparkled. “It’s not every day I get to fuck a temptress in my office.” He glanced about her dining room and kitchen. “And this is quite nice. Rather domestic.”

“Domestic! Don’t plan on becoming a fixture!” She saw him blanch. That was good—she’d set him back on his heels. And she wasn’t about to give up her advantage. “Let’s get a couple things straight right now. I’m not looking for permanency. You must know that.”  She waited for him to nod. “And I can juggle more than one person at a time.”

This time his gleam was undecipherable. “I just bet you can.”

She chose to ignore his jibe. “So we’re clear—no strings, no expectations.”

He lifted his wine glass in salute. “No strings, no expectations.” He cocked a single eyebrow. “Other than some mind blowing sex.”

“Absolutely.” She hoisted her glass in response. “No holds barred.”

“Well see about that,” he muttered, pushing away his plate.

“You want any more?”

Lacy patted her mouth with a napkin. “Did you have anything special in mind?”

“I do. Thank you for asking,” he said, tracing the back of her hand with a finger. “Perhaps something a little puffy. Something with a little tang to it. Something that oozes when I bite into it.”