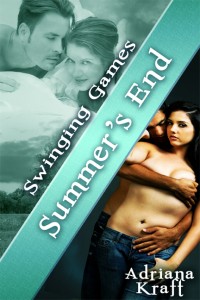 You gotta play the game to the fullest. You never know when it will end.

Jen checked the bedroom clock. “Our guests should start arriving in an hour.” She smoothed out the tops of her black thigh-highs and peeked at her husband slipping on a black shirt. “Don’t know why we spend so much time deciding what to wear when most of it’s going to come off anyway.”

She reached for a black mini with a zipper on the side, stepped into it and with some effort pulled it up over her butt.

“I know what you mean,” Brett agreed, grinning at her reflection in the mirror. “You look hot. At least you’ve learned not to bother with thongs or panties.”

“Learned the hard way. Can’t tell you how many I’ve lost because they were ripped off or simply misplaced. There must be some parallel universe that has a lost and found for swingers.”