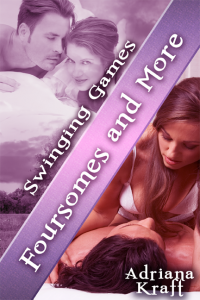 Friends with Benefits—what if some of those friends seek exclusivity?

Brett and Jen say yes to another much younger bi-racial couple seeking a mature lifestyle couple as guide and mentor—but Donna and Ryan choose this moment to raise the ante and push for an exclusive relationship. It doesn’t take long for the circle to include Carl and Alice—what will happen when yet another couple shows up to the party?

Five Stars at Extasy I liked how these couples had relationships outside of sex…I found it enjoyable that these couples were over 50 and active sexually and physically. It is good to know hot sex never dies. Sheila Galagher

Brett checked his watch for the third time and frowned at his wife, who was finishing a second glass of wine. He glanced toward the entryway to the hotel bar, then back at Jen. “They’re late. Do you suppose someone got cold feet?”

Jen winced. “Hope not, but Jason did seem very quiet and nervous during our last four-way phone conversation.”

“Yeah. Crystal sounded much more eager than her husband.”

“Even though they haven’t swung before, it sounds like Crystal was more sexually active than Jason before they married.”

“You may have to boost his ego to make this work.”

“If we have the chance.” Jen looked toward the entryway. “I’d say we have about a fifty percent chance of a no show.”

“At least that doesn’t happen often, but once is too many.” Brett tilted his head and gave his wife a sly smile. “Guess you might be stuck with me for the night.”

She shrugged. “Could do a lot worse. A two-room suite might be a bit much, though.”

“We’ll have to try out both beds in order to get our money’s worth. By the way, I love your new haircut. Short and sassy.”

“Do you like the new darker tints? Sort of blends in with my naturally red hair.”

“Sexy. Dark and red. Bold. No wonder I’ll never tire of you. You keep changing before my eyes.”

“You’d better not tire of me. Maybe you married more than one woman.” Jen slid a hand along his thigh. “You think you can keep me going half the night hopping from bed to bed if our new playmates don’t show?”

Smiling broadly, Jen waved toward the couple entering the bar. “Looks like we may have to share those beds after all.”