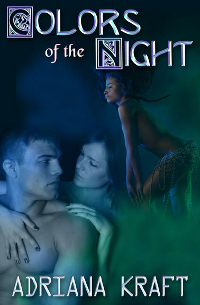 A love triangle with a dazzling immortal goddess – will it ignite or extinguish the dying embers of a contemporary couple’s love?

This book is excellent. I love the idea of the Goddess of Love teaching this couple how to love and accept love. The characters are normal people, just a normal couple with normal issues and the Goddess is – well – a Goddess, so she is not normal but she is still incredibly sexy and confident. ~ Monica BBB

The dazzling and timeless love goddess Aria pays a visit to struggling thirty-something Jamie and Ryan Hazleton, who are on the brink of divorce.  When the hot sex that results from her first lesson cools to icy glares, Aria decides to move in with them and provide more experiential learning.  Can Ryan overcome his jealousy of Jamie’s uninhibited response to the delectable goddess? What if he succumbs to his own desires?  Only time will tell whether this love triangle with an immortal will ignite or extinguish the dying embers of Jamie and Ryan’s love.

Jamie Hazelton stifled the sobs welling up from deep within and listened intensely to the man lying next to her in the snug tent. Had she heard something? She’d thought her husband was asleep—in fact, that was why she’d allowed herself to give in to her feelings. She was sure he’d be oblivious. He always was.

Not that Ryan wasn’t trying. He’d suggested this camping trip to their favorite north woods lake. He’d said he wanted to reconnect with her—whatever that meant. She could tell he’d connected with the rippling lake waters, the haunting sounds of the loons and the lazy afternoons drifting in the canoe. Sometimes even she’d felt soothed and hopeful during the daytime.

Nights were another story. Not once had he reached for her, and damned if she was going to be the one to take the first step. Too much pain. Maybe they should just pack up and go home and face the facts—there was nothing left.

More tears. Jamie buried her face in the rolled up sweatshirt that doubled for a pillow and froze—that was a sound coming from Ryan’s direction. What was he doing? She squeezed her eyes shut tight and lay stock still. Hell would freeze over before she’d let him know she was awake.

She heard the tent zipper open and felt the rush of cool night air all in the same instant. Where was he going in the middle of the night? Startled, she lifted her head and opened her eyes. A tiny sliver of night sky was visible through the open tent flap—and it was pulsating with light.

“Jamie. Wake up. You’ve got to see this.” Ryan’s voice was a whisper.

Did he really want her to join him? She hugged herself against the chill, grabbed her sweatshirt and crawled out of the tent.

Ryan’s hands were reaching for her, so she took them and let him pull her to a stand. Tall columns of color—multiple hues of greens, blues, reds, yellows and occasional whites—fell in a shimmering waterfall connecting sky and lake. The colors danced across the entire dome of the sky. She’d never seen anything like it.

They stood hand in hand for a long minute, then wordlessly walked down to the lakeshore and sat side by side on a low rock. Shrouded in rising mist, the lake seemed to hover between earth and sky with no boundary. Jamie lost herself in the throbbing rhythms of the dancing light.

“This is what I’ve been missing,” she heard herself say. “It feels like magic, like time is suspended. I wish we could catch and hold this moment forever.”

“I know,” Ryan replied. “It’s been difficult remembering such moments. I sometimes wonder what else we’ve forgotten.”

“You have each forgotten how to love.”

Jamie gasped and squeezed Ryan’s hand. “Who said that?”

Jamie watched in awe as the mist swirled and collected into the shape of a stunning female. The image pirouetted as if to prove she was much more than a vision. Jamie tried not to stare— the woman’s copper skin was barely concealed in a gauzy white gown. Jamie could make out dark nipples on her pendulous breasts as the image floated closer.

“You two need help.” The phantom shook her head, sending her long dark hair flying. “Your marriage is crumbling. You care for each other, but you’ve forgotten how to love—if you ever truly knew how.”

“Who are you?” Ryan jumped to his feet.

“My name is Aria. I am a goddess of love, and I have come to show you how to love.”